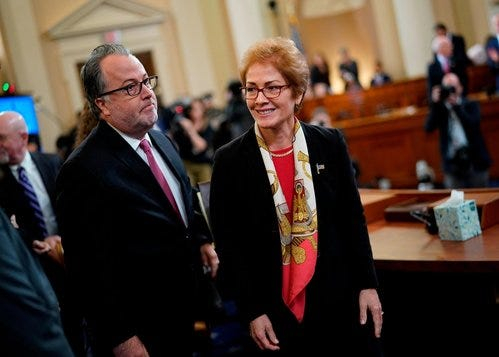 By Jennifer Hansler and Nicole Gaouette, CNNIn the face of attacks from the President of the United States and relative silence from the State Department, former US Ambassador to Ukraine Marie "Masha" Yovanovitch offered a strong defense of the work of career foreign service officers -- and warned of the impact the attacks were having on the diplomatic ranks.

The highly respected envoy, who testified publicly as part of the House impeachment inquiry on Friday, was forced out of her post in Kiev after a targeted smear campaign amplified by President Donald Trump's allies, including his personal lawyer Rudy Giuliani. In her opening statement, Yovanovitch sought to defend her work and that of her colleagues in the foreign service and called upon the leadership in the State Department to do the same. Her eloquent and forceful assessment of foreign service officers' service and sacrifices earned praise and pride from the more than half a dozen current and former State Department officials who spoke to CNN.

'I count myself lucky to be a Foreign Service Officer'"We take our oath of office seriously, the same oath that each one of you take, 'to support and defend the Constitution of the United States against all enemies, foreign and domestic' and to 'bear true faith and allegiance to the same," she told the lawmakers.

Contrasting the "perception that diplomats lead a comfortable life throwing dinner parties in fancy homes," Yovanovitch described her own tenure in the foreign service: moving 13 times, serving in five hardship posts, being stationed in Somalia during the civil war, getting caught in crossfire in Russia.

"We are professionals, public servants who by vocation and training pursue the policies of the President, regardless of who holds that office or what party they affiliate with," she said of the foreign service.

"We are people who repeatedly uproot our lives, who risk -- and sometimes give -- our lives for this country," Yovanovitch continued, referencing the Iran hostage crisis and the four Americans who were killed in the attack on the US consulate in Benghazi, Libya.

"I count myself lucky to be a Foreign Service Officer, fortunate to serve with the best America has to offer, blessed to serve the American people for the last 33 years," Yovanovitch said. At the end of her hearing, she walked out to a seemingly spontaneous round of applause.

Retired Ambassador Jim Melville told CNN Friday that he was "so proud to be Ambassador Yovanovitch's colleague and friend" -- encompassing the feelings of many in the foreign service.

"It was a perfect encapsulation of who we think we are," another State Department official said of her description of the foreign service.

On Twitter, former secretaries of state like Madeleine Albright and John Kerry rallied to Yovanovitch's defense after a tweeted attack from the President -- sent just minutes after she finished her opening statement -- and foreign service officers shared support for their colleague and profession with #FSProud. That hashtag was trending in Washington on Friday evening.

Yovanovitch's ongoing testimony and the difficulties she was facing weighed heavily on people around the department, according to one employee, who said that in small meetings and gatherings throughout the day, people raised the career diplomat's progress before the committee and affirmed their pride and support for her. Not many could watch the proceedings, but this employee said the most widespread sentiment they heard was that people were "with her in spirit."

'This is about far more than me'The former ambassador to Ukraine's warnings about the dearth in morale and the State Department being "hollowed out from within" resonated with the officials who spoke to CNN Friday.

In her opening statement, Yovanovitch delivered what amounted in an indictment of Secretary of State Mike Pompeo, telling lawmakers, "I remain disappointed that the department's leadership and others have declined to acknowledge that the attacks against me and others are dangerously wrong."

"This is about far more than me or a couple of individuals. As Foreign Service professionals are being denigrated and undermined, the institution is also being degraded. This will soon cause real harm, if it hasn't already," she said.

"Moreover, the attacks are leading to a crisis in the State Department as the policy process is visibly unraveling, leadership vacancies go unfilled, and senior and mid-level officers ponder an uncertain future and head for the doors. The crisis has moved from the impact on individuals to an impact on the institution," Yovanovitch continued.

The State Department has sought to downplay the loss of senior and mid-level officials -- a trend that began under former Secretary of State Rex Tillerson. Under Secretary for Management Brian Bulatao and Director General of the Foreign Service and Director of Human Resources Carol Perez recently highlighted "an all-time high of 8,348 Foreign Service Generalists and Consular Fellows this summer," "skyrocketing promotion rates," and nearly twice as many confirmed chiefs of mission as last year, according to a person familiar. More than 65% of the chief of mission positions are filled by career Foreign Service officers, they said.

'A new low'"It is the responsibility of the Department's leaders to stand up for the institution and the individuals who make that institution the most effective diplomatic force in the world. And Congress has a responsibility to reinvest in our diplomacy," Yovanovitch said Friday.

Not long after, Trump launched another smear against the career diplomat.

"Everywhere Marie Yovanovitch went turned bad. She started off in Somalia, how did that go? Then fast forward to Ukraine, where the new Ukrainian President spoke unfavorably about her in my second phone call with him. It is a U.S. President's absolute right to appoint ambassadors," he wrote on Twitter.

It is not the first time Trump has attacked Yovanovitch, but one foreign service officer described it as "a new low." The State Department official described it as "stunningly ignorant" and said morale worsened because of it. Former White House Director for Global Engagement Brett Bruen told CNN that he "had the experience of a regime leader in Africa who literally said the same thing about (him)."

"They published an article that said everywhere I'd gone had turned to crap," Bruen, who is also a former diplomat, said, adding it "brings back really scary memories of what it's like to be fingered by inaccurate accusations."

"Good Lord, blaming Masha for what happened in Somalia 35 years ago, it just, it takes my breath away," said Melville, the retired ambassador who worked with Yovanovitch. "I feel like we're living on the other side of that Lewis Carroll's mirror. It's just so disturbing."

The first State Department official said that Pompeo's public silence has become an "increasingly glaring deficiency and really infuriating," saying they and others have moved beyond low morale to anger.

"The silence from the 7th floor of the State Department," where leadership sits, "is deafening and damaging, not just for the foreign service or here in the US, but foreign actors are listening and feel empowered to go after our people because the Secretary is not defending them," Bruen said.

"I think that the best thing that Secretary Pompeo could do would be to show some courage and leadership. And he has not shown much of that lately at all," Melville said.

The State Department also did not comment on criticism of Pompeo.