Drawing on the archives of Radio Mogadishu, Analog Africa’s latest archival compilation tells a story of openness that is at stark odds with the past few decades of Somalia’s history. 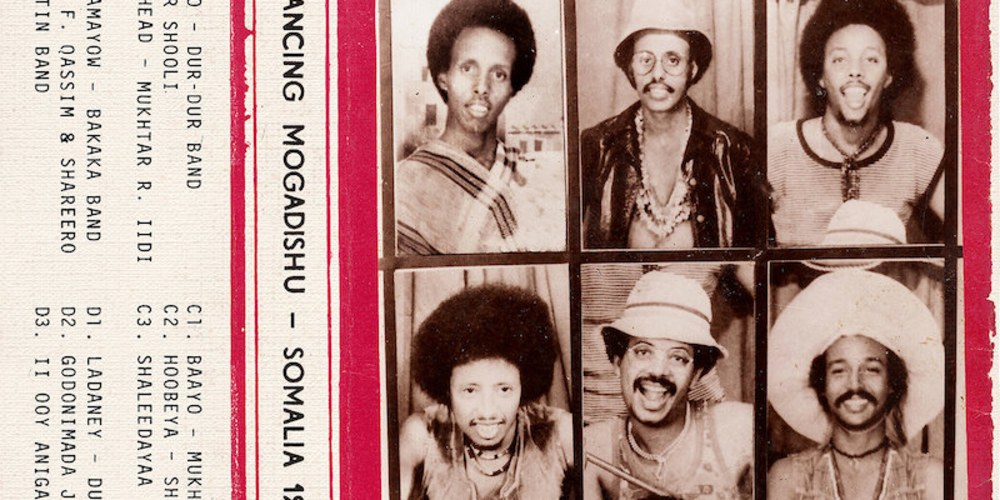 For years, Samy Ben Redjeb has been traveling across Africa and Latin America in search of forgotten sounds: vintage funk and myriad hybrids, offshoots, and variants that proliferated in the post-colonial era. Since 2006, his label, Analog Africa, has turned up dusty recordings from Benin, Togo, Ghana, Angola, Burkina Faso, Congo, Senegal, Cape Verde, Cameroon, Zimbabwe, Colombia, Brazil—many of them rarely, if ever, heard outside of the communities that produced them. But it’s likely that Mogadisco - Dancing Mogadishu (Somalia 1972​-​1991) represents his most ambitious project to date, given Somalia’s woes. A former colony of the UK and Italy, Somalia endured a 22-year military dictatorship throughout the 1970s and ’80s, followed, in 1991, by a civil war that continues today. Though civil life in Mogadishu has rebounded since a new government was formed in 2012, the Al Qaeda-linked militant group Al Shabab remains a threat: In late December, terrorists plowed a truck laden with explosives into a busy intersection in the capital, killing at least 79.

Amid such persistent security threats, a city once described as “the pearl of the Indian Ocean” is widely considered a danger zone for travelers—Ben Redjef was accompanied by armed security escorts—which only makes his archival efforts there that much more valuable. Analog Africa previously explored Somalian music via a reissued pair of LPs by the Dur-Dur Band, a legendary Mogadishu group and long-time house band at the city’s Jubba Hotel, who blended funk, soul, and disco with styles like daantho, a northern Somali rhythm resembling reggae’s relaxed cadence, and saar, a trance-inducing ritual style, into a rich, intoxicating fusion at once familiar and strange. But Mogadisco represents a far more extensive look at the country’s recent musical past.

In 2016, equipped with little more than the names of a few Somali acts gleaned from diggers’ lore and dubbed cassettes, Ben Redjeb turned up in the port city and finagled an introduction at Radio Mogadishu, whose archives house decades’ worth of the country’s musical history. He spent weeks going through stacks of aging reel-to-reel tapes and digitizing the most enticing finds; he spent years more tracking down surviving musicians, many now living in exile, and interviewing them. As is typical for Analog Africa’s releases, the liner notes here constitute a vital complement to the music, illuminating the stories both personal and societal—a young shepherd who found fame thanks to a singing contest in the big city; a beloved bandleader electrocuted on stage by faulty wiring—that lend meaning and emotional resonance to unfamiliar sounds and opaque cultural cues.

Ben Redjeb’s tastes run toward the heavy and mind-bending—as one might guess from a release like African Scream Contest: Raw & Psychedelic Sounds from Benin & Togo 70s—and Mogadisco follows suit. (The liner notes document an amusing exchange with Omar Shooli, who is displeased that Ben Redjeb has chosen the echo-soaked, reggae-inspired “Hab Isii,” never a hit in its day, over one of Shooli’s “nice” songs, the ones he performed at weddings and important ceremonial occasions.) The best material here sounds unlike anything else. Shimaali & Killer’s “Hoobeya” runs lilting call-and-response vocals through tinny reverb and wraps them up in reggae guitar and slinky drum machine; Iftin Band’s “Sirmaqabe” pairs spacey synthesizers with spaghetti-western twang and horse-clop drumming. Both songs make a strong argument that dividing lines, whether geographical or musical, are purely notional. It is a sad irony that musicians so opposed to the fixity of borders would have their fates determined by the whims of mapmakers: All three Dur-Dur songs here were recorded abroad, while the band was exiled in Ethiopia and Djibouti; Shimaali and Killer fled to Saudi Arabia and Yemen, where Killer died in 2008.

On some songs, a kind of uncanny-valley effect takes hold: Omar Shooli’s “Hab Isii” sounds almost like 1960s ska—at least, until the organs and singing come in, twining around each other in a strange modal embrace. Fans of Ethiopian jazz will find plenty to love, particularly in the lilting sax and organ riffing of Dur-Dur Band’s “Daradaa Muxibo”; throughout the album, pentatonic scales and keening vocal performances lend an eerie, melancholy undertone to up-tempo funk jams—a bewitching contrast. The musicianship, too, is stellar. From their three songs included here, it’s easy to see why Dur-Dur Band became legendary: Their intuitive grasp of funk’s elastic pocket, combined with the way they play with empty space and sonic textures, would stand out in any context. But the backstories of these songs make some of them even more remarkable. The title of Bakaka Band’s “Geeisyada Halgamayow,” a side-winding, Hammond-led funk burner marked by all manner of twists and turns, translates as “Brave Fighters”: The government-sponsored group was tasked with inspiring troops on the front lines of Somalia’s war with Ethiopia.

There’s a narrative implicit in the histories being told, one familiar from other Analog Africa compilations, and much of it comes down to the importance of radio. Radio Mogadishu, a government station, played a unifying role, helping draw people to the capital from remote corners of the nation. They brought with them the musical styles of their towns and villages and, in the city, blended those with cosmopolitan styles—rock, disco, reggae—carried on the airwaves from even farther away. It is a story of openness that is at stark odds with the past few decades of Somalia’s history.

The booklet includes an interview with Abshir Hashi Ali, the aging caretaker of Radio Mogadishu. A former police colonel, he was tasked with protecting its archives—an estimated 100,000 songs—when violence broke out in the early ’90s and Mogadishu was divided into clan-controlled enclaves. Over the years, he has seen the station targeted by Al Shabab, bombarded by Americans, and ransacked by looters; in one confrontation, he threw himself upon a grenade-toting thief who was determined to gain control of the building. “I… told him that we would both die before he took the keys from me,” Ali recalls. “I wasn’t joking and he understood that. So he left.” It’s in moments like these that the real importance of a project like this becomes clear. It’s easy to view a compilation like Mogadisco as yet another crate-digger’s search for funk’s holy grail—or, more cynically, to read the references to armed guards and suicide bombings as a kind of adventurism. But the music contained within constitutes the story of a people, a story currently in danger of vanishing, as Radio Mogadishu races to digitize its vast store of disintegrating tapes. “I have dedicated my life to this place,” says Ali. “I’m doing this so it can get to the next generation; so that the culture, the heritage and the songs of Somalia don’t disappear.” Mogadisco is one small but essential step toward reclaiming that legacy for a global listenership.