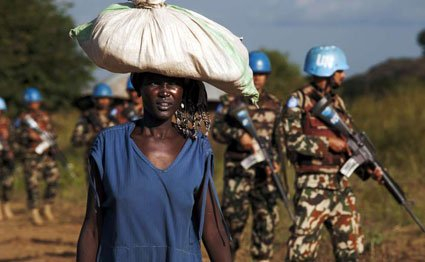 JUBA - The Security Council decided to renew the mandate of the United Nations Mission in South Sudan (UNMISS) today amid encouraging developments in that country’s peace process, including the beginning of efforts to form the Revitalized Transitional Government of National Unity.

Unanimously adopting resolution 2514 (2020) under Chapter VII of the Charter of the United Nations, the Council also decided to maintain the Mission’s overall force levels at a ceiling of 17,000 troops, including the Regional Protection Force, and 2,101 police officers.  The renewed mandate will run until 15 March 2021.

By terms of the 12‑page resolution, the 15‑member Council demanded that all parties to the conflict immediately cease fighting throughout South Sudan and engage in political dialogue.  It also demanded that the country’s leaders implement the permanent ceasefire declared in the 2018 Revitalized Agreement on the Resolution of the Conflict in the Republic of South Sudan.

Additionally, the Council demanded that the Government of South Sudan immediately cease obstruction of UNMISS in the performance of its mandate, cease obstruction of international and national humanitarian actors in their delivery of aid to civilians, and facilitate free movement for the Ceasefire and Transitional Security Arrangements Monitoring and Evaluation Commission.

Also by the text, the Council authorized the Mission “to use all necessary means necessary” to protect civilians, to create conditions suitable to the delivery of humanitarian assistance, and to support implementation of the Revitalized Agreement.  It also expressed its intention to consider “all appropriate measures” against those who take actions that undermine peace, security and stability in South Sudan.

By further terms, the Council encouraged the Intergovernmental Authority on Development (IGAD), the African Union Peace and Security Council and countries in the region to continue their firm engagement with South Sudan’s leaders, and to meet, without delay, their commitments under the Revitalized Agreement and other cessation-of-hostilities accords.

The Council requested that the Secretary-General provide, no later than 15 December, an independent strategic review of UNMISS, assessing the challenges to peace and security in South Sudan, with detailed recommendations for a possible reconfiguration of the Mission’s mandate, as well as its civilian, military and police components to account for developments in the peace process.

Michael Barkin (United States) noted that, for the first time in years, the UNMISS mandate has been renewed in the context of positive developments.  While acknowledging that the hard work of implementing the peace accord is only just beginning, he emphasized that the Mission will have a critical role to play as the Transitional Government takes shape.  The renewed mandate reinforces its core mission while encouraging it to be more mobile and responsive to emerging threats, he said, emphasizing that, for its part, the Transitional Government must focus on humanitarian concerns and upholding human rights.  He went on to emphasize:  “There is no bigger supporter of the people of South Sudan than the United States.”

Juergen Schulz (Germany), while announcing that his country’s Parliament voted today to continue its military contribution to UNMISS, expressed disappointment that the resolution does not contain a reference to the security implications of the effects of climate change, as proposed by his delegation and supported by most Council members.  “Turning a blind eye will not make a threat multiplier like climate change disappear,” he pointed out, warning that disregarding the issue jeopardizes the effectiveness of the Council’s efforts.