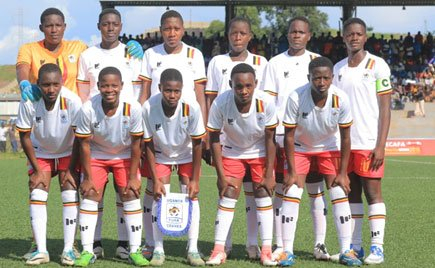 By Makhtum MuziransaThe U-17 girls national football team made 2019 their year after winning both the Cosafa and Cecafa Girls Cups in Mauritius and Njeru respectively and are now on course for a busy 2020 that could culminate into a World Cup appearance.The seventh edition of the biennial Fifa U-17 Women’s World Cup which was started in 2008 will be held in India between November 2 and 21.The tournament will have 16 teams – three from each of Africa, Asia, Concacaf (Central, North America and Caribbean), Europe and South America while Oceania will present only one side.Finishing in Africa’s top three over three rounds will be the ultimate goal when Uganda’s players reconvene from the festive holidays. Uganda will host Ethiopia, who did not play any U-17 tournaments last year, in the first leg of the preliminary round of Africa’s leg of the U17 Women’s World Cup Qualifiers on January 11 at Star Times Stadium, Lugogo. The second leg in Addis Ababa will be on the weekend of January 25 and 26.Coach Ayub Khalifan’s side can have no quivers over their physical and mental readiness to take on this assignment. After all this is a side that scored 46 goals to win the inaugural Cosafa U-17 Girls Tournament in Mauritius in September at the expense of already established sides like South Africa and Zambia.They also had captain Juliet Nalukenge as top scorer with 18 goals while Daphine Nyayenga was named goalkeeper of the tournament.They then went to Njeru in December for the inaugural Cecafa Girls U-17 tourney, which was played in a round-robin format and scored 28 goals, conceding just once in five games en route to winning the Cup.Nyayenga was again named best custodian while Fauzia Najjemba was the tournament’s most valuable player (MVP). Nalukenge managed nine goals and finished as second top scorer.Meanwhile, Nigeria, Ghana, Cameroon and South Africa got byes to the second round, where they will be joined by the eight sides that make it past the first round.The six winners from the second round games due in March will then face off in May to determine the three sides that will represent the continent in India.Africa U-17 W. Cup QualifiersFirst Round FixturesUganda vs EthiopiaNamibia vs ZambiaBotswana vs ZimbabweDjibouti vs MoroccoTanzania vs BurundiSao Tome and Principe vs DR CongoLiberia vs NigerGuinea vs Guinea-Bissau