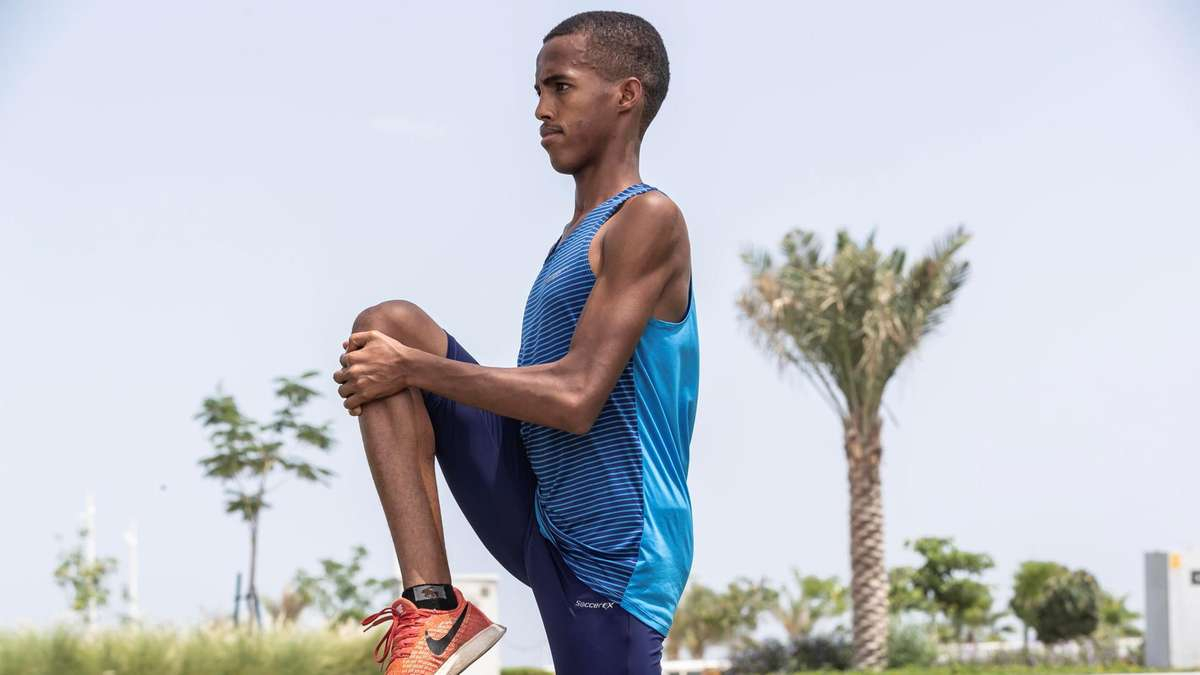 Abdulsalam Farah hopes to follow in the footsteps of his hero and namesake Mo Farah and become a champion long distance runner.

Just like Britain's most successful track athlete, Abdulsalam Farah is of Somali heritage but grew up in Al Ain.

Abdulsalam, 19, said he became hooked on athletics after watching Mo Farah on TV.

“I used to watch athletics from a young age on television and Mo Farah was a name that drew my attention for the simple reason he had my surname and he was from Somalia,” Abdulsalam told The National.

Mo Farah's achievements include back-to-back gold medals in both the 5,000 and 10,000 metres at the London and Rio Olympics as well as seven World Championship gold medals.

“He is my role model," Abdulsalam said. "I want to follow on his path. I want to be better than him. People may think I am crazy but nobody becomes a world champion without a start. I believe I can achieve my objectives if I work towards my goals.”

Abdulsalam holds several records in the youth division in the UAE and comes from good stock. Abdi Bile, Somalia's most decorated track and field star and winner of the 1,500m at the 1987 World Championships in Rome, is a distant relative. “I haven’t met him as I lived all my life here in the UAE but I came to know the connection through my father,” Abdulsalam said.

The youngest in a family of eight boys and one girl, Abdulsalam joined Al Ain Club athletic team in 2017 and went on to set several national records including in road races over 5km and 10km. He also won the 1,500m gold medal at the Gulf University Games in Kuwait.

In 2018, he travelled to Kenya at his own expense to train under Jimmy Beauttah, better known to Kenyans as 'Coach Simba', at Kip Keino's High Performance Training Centre where he spent three months training at high altitude.

Last year, he twice travelled to Ethiopia to train alongside elite athletes such as Kenya's Micah Kogo, the 10,000m Olympic bronze medallist at Beijing 2008, Genzebe Dibaba, the female Ethiopian who won silver in the 1,500m at Rio four years ago, and Djibouti’s 2016 IAAF Diamond League 1,000m chaampion Ayanleh Souleiman.

Abdulsalam was set to return to Kenya in June, but with travel restrictions in place due to the Covid-19 outbreak, that looks unlikely. He hopes to run at the rescheduled World University Cross Country Championship next year in Morocco after it was postponed from the original date of March 7.

Abdulsalam enrolled at Al Ain University in January 2019 to study for a degree in Health and Physical Education where he first encountered Fahad bin Braik, a former UAE national team distance runner and now his manager.

“I heard from my friends in the athletics circle of a teenage distance runner with a lot of potential and I decided to meet him,” Bin Braik said.

“That’s how our relationship began and I truly believe he has the potential to make it big.

“This boy has the passion and the potential but I would like to see him achieve success in both his academics and athletics,” he added.

“I was really fortunate to get connected with Fahad." Abdulsalam said. "He’s guided me in my athletics career in the last three years and will continue to do so until I achieve my objectives. He’s not only a manager but an older brother to me.”

With global sports still suffering from a lack of competition due to the coronavirus pandemic, Abdulsalam's future plans, as far as international competition, are on hold.

When it is safe to compete, Abdulsalam said his immediate target is the 2023 World Championships in Budapest. He hopes to do so representing the UAE, rather than Somalia.

“My main goal is to participate in the IAAF World Championships in 2023. I wish I get to run under the UAE flag as I was born here," he said.

“I have approached both the UAE Athletics Federation and the UAE National Olympic Committee to say that I’ll run under their flag without any obligation on monetary gains or a passport.

“I want to show gratitude for the country that has given me free education and free health services. I just need the chance. They have told me that they’ll look into my matter. Therefore, fingers crossed on that."

I want to show gratitude for the country that has given me free education and free health services. I just need the chance. They have told me that they’ll look into my matter. Therefore, fingers crossed on that

Bin Braik, 39, represented the UAE for 14 years before hanging up his running shoes four years ago.

He cites a critical lack of support as one of the reasons he was unable to realise his own dreams and urged the authorities to invest in athletes like Abdulsalam if they hope to see the UAE represented on the track at future Olympics.

He said: “Abdulsalam has the potential and I urge the national companies to step forward and help him build his career as a professional.”