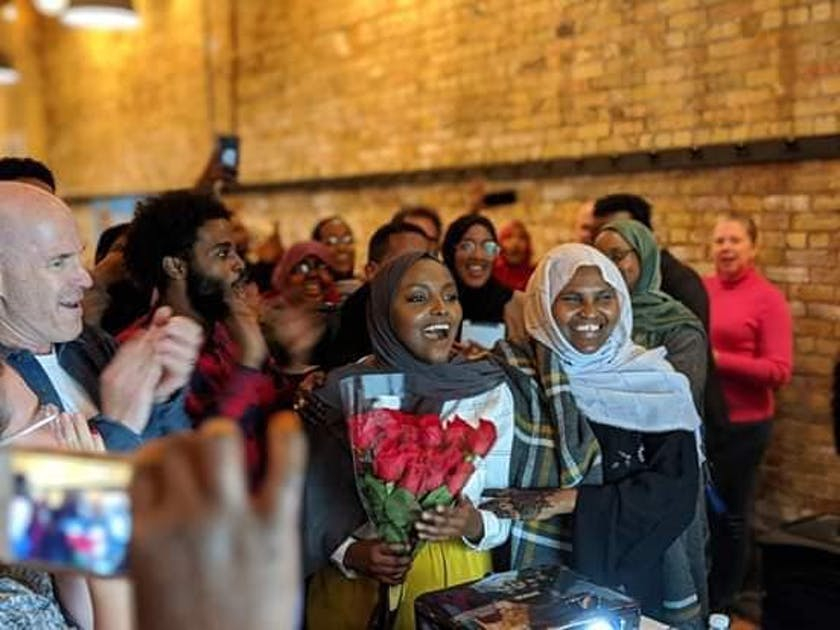 She came to St. Louis Park as a 10-year-old refugee, attended public school, served on multicultural advisory committees, won the city’s Human Rights Award, and still spent much of her adult life feeling like an outsider—a “visitor” – in her own home. But on Tuesday, the city rallied behind her platform of creating more affordable housing and achieving carbon neutrality by 2040, giving her a whopping 63 percent of the vote.

Which, predictably, prompted a vocal faction on Twitter to throw up the usual bat signal.

“Minnesota has fallen!” Amy Mek tweeted Tuesday night. As proof, she posted a video of Mohamed being interviewed by a Somali TV station. The journalist asked questions in Somali. Mohamed replied in kind.

This, to Mek, was distressing. She speculated Mohamed “didn’t feel the need to speak English” because “her constituency is Somali.”

She will be the first Muslim woman & 1st Somali on the City Council.

Mohamed didn't feel the need to speak English because her constituency is Somali. #ElectionNight pic.twitter.com/6WPmwYb3jk

There’s a lot to unpack about why Mek thinks that would be a problem. Regardless, it isn’t true. St. Louis Park is in fact 83 percent white—which, like a lot of places in Minnesota, is whiter than average as far as the United States goes. Black or African American residents make up about 8 percent of the city’s population.

This kind of alarmism is par for the course when it comes to Mek. The self-proclaimed gun-loving vegan’s New York-based account has been spewing a range of suspicion to outright disgust regarding Muslims and immigrants for years, and her thousands of followers have been lapping it up. Her tweet about Mohamed got nearly 8,000 retweets and over 7,000 likes. Commenters insisted that this was a sign America needed to “wake up” and that Minnesota was in a “downward spiral.”

“OMFG!!” one said. “These people should not be eligible to run for office.”

A lot of that criticism came from far-flung states and outside the country. Closer to home, it was another story. As the tweet spread, a few Minnesotans stood up to Mek, like local journalist Mukhtar Ibrahim.

“Somalis are winning in Minnesota because they belong here, working hard for it, and are not going anywhere,” he tweeted Wednesday.

Plenty of people who voted for Mohamed—some of whom took time to specify that they are not, in fact, Somali—joined in.

“I admire people who are bilingual; it is of course a tremendous asset,” another said.

She’s speaking in Somali because she’s giving an interview to a Somali journalist who works for a Somali TV channel.

Somalis are winning in Minnesota because they belong here, working hard for it, and are not going anywhere.

“Minnesota has fallen….in love with Nadia Mohamed,” one said.

“I admire people who are bilingual; it is of course a tremendous asset,” another said.

Mohamed is aware of what's happening online, but hasn't been actively engaging. The past week has been a whirlwind of interviews and resting up from an energetic campaign, and she really wouldn't have the time to address the opinions of someone who tweets about 25 times a day and whose account has already been banned in Germany and France even if she wanted to.

And she doesn't. She's consciously taking the high road on this one. She appreciates the people coming to her defense, but she almost wishes they wouldn't dignify Mek with a response.

“Any kind of reaction at all will drag you down with them,” she says.

She's aware of what her unprecedented election means for this community, and appreciates the recognition, but as far as she's concerned, the time for being the “first” Somali, the “first” Muslim, has long passed.

“It's 2019,” she says. She's ready to get to work—starting with securing more affordable housing for fixed-income seniors, young people, and low-income families.

“I think when you're the first of anything, people tend to stop at your identity,” she says. Her next job is reaching out to her constituents and making sure they know she's here for them—all of them.