Trump Doubles Down on Threats Against Iran as Regional Tensions Soar 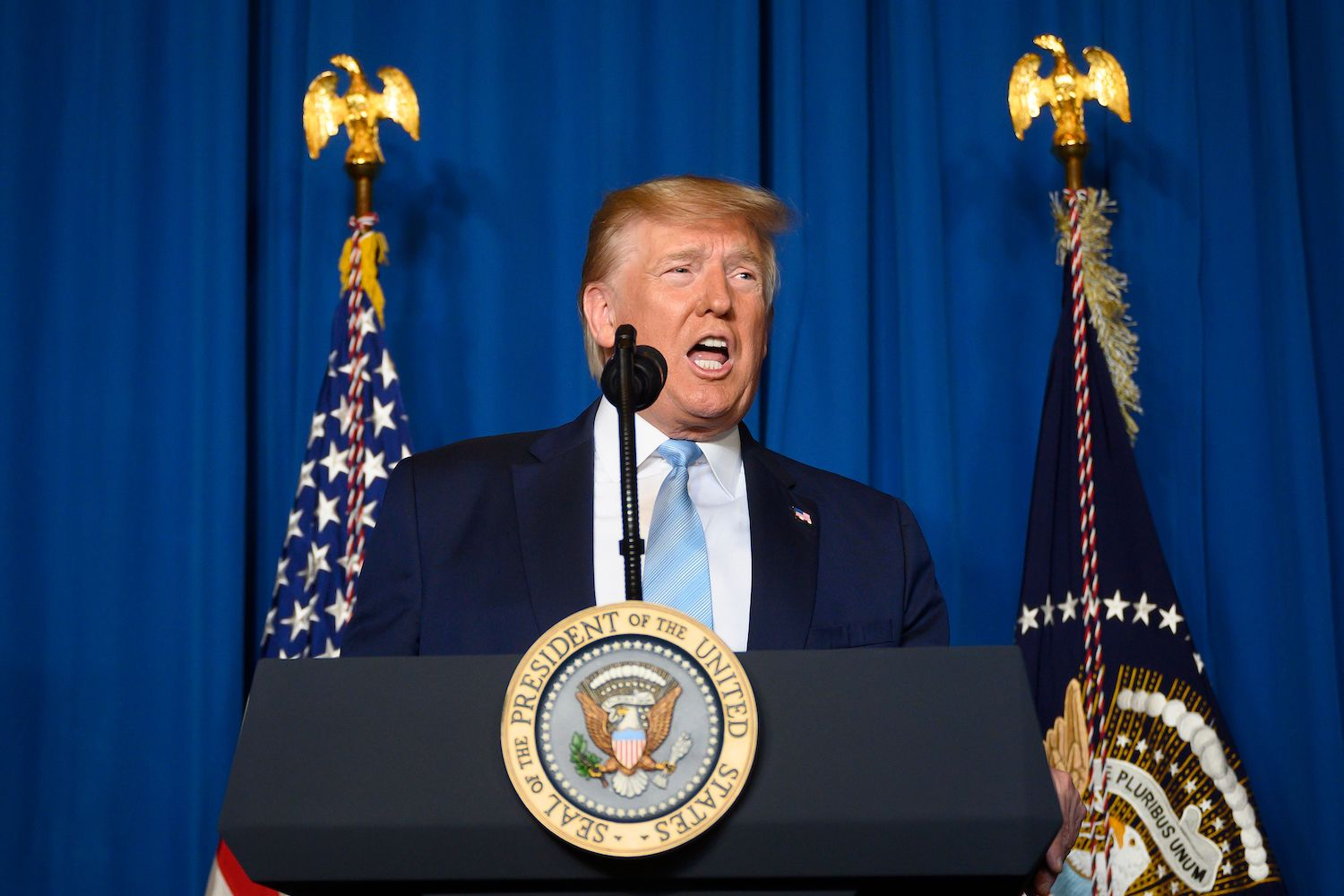 Welcome to Foreign Policy’s Security Brief. What’s on tap today: U.S. President Donald Trump doubles down on threats against Iran if it retaliates for the killing of Maj. Gen. Qassem Suleimani, Turkey will send troops to Libya, and the U.S. ambassador to Afghanistan steps down.

If you would like to receive Security Brief in your inbox every Monday, please sign up here.

U.S. President Donald Trump has doubled down on threats to strike Iranian cultural sites if Tehran plans retaliatory attacks against the United States for the targeted killing of Qassem Suleimani, the latest escalation in the aftermath of Trump’s decision to take out the second most powerful Iranian in a U.S. drone strike last week.

Aboard Air Force One on Sunday, Trump threatened “major retaliation” if Iran targets Americans or American interests, reiterating the spirit of his Saturday tweet declaring that the United States had identified 52 sites—some of “cultural” significance—to strike. The president seems undeterred by critics, who said such a move would be considered a war crime under international law.

Troops on alert. Trump’s comments came as the region braced for conflict. U.S. troops in the Middle East and Europe are on heightened alert, and the U.S.-led coalition against the Islamic State said Sunday it had suspended operations against the terrorist group. In Iraq, tens of thousands of mourners took to the streets of Baghdad calling for revenge. Two rocket attacks occurred near Iraqi bases that host U.S. troops, though none were injured.

U.S. forces out? Iraq’s parliament passed a resolution calling expel the roughly 5,200 U.S. troops that remain in the country. Experts said the move could have disastrous consequences, crippling the fight against ISIS and abandoning Iraq to Iranian influence. For now the vote is mainly symbolic, as the expulsion of U.S. troops requires signoff from Iraq’s executive branch.

That may be in the cards: NBC reported Sunday that Iraqi Prime Minister Adel Abdul-Mahdi is expected to tell U.S. Ambassador Matthew Tueller that U.S. troops must leave the country.

Iran all but ends nuclear deal. The killing of Suleimani appears to be the final death knell for the 2015 nuclear deal, as Iran announced on Sunday it would abandon the accord’s central provisions. Iran will no longer limit uranium enrichment, the amount of stockpiled uranium, or research and development in nuclear activities—all key ways the agreement blocked Tehran from having enough material to build a nuclear weapon.

Iran said it remains open to negotiations with European partners, leaving room to return to the deal if U.S. sanctions were lifted.

Maduro takeover? Venezuelan President Nicolás Maduro and his supporters took a major step toward consolidating power on Sunday, replacing Juan Guaidó with purported ally Luis Parra as leader of the National Assembly—widely seen as the last democratic institution in the country. (Guaidó in part based his claim for Venezuela’s presidency on his position as congress chief.) A crisis erupted when the doors to the parliament building were locked, and troops loyal to Maduro prevented Guaidó and other lawmakers from entering—stopping his bid for reelection. Opposition lawmakers then voted to reelect Guaidó in a session held elsewhere, meaning two politicians now claim to lead the legislature.

The international community still supports Guaidó’s claim to the presidency, but the move by Maduro’s regime will likely diminish his role in Venezuelan domestic politics.

Turkey sending troops to Libya. Turkish President Recep Tayyip Erdogan announced Sunday that he was sending troops to Libya to support the internationally recognized government in Tripoli. The move is the latest Turkish attempt to embed itself in regional affairs. It has sent arms to Libya for months and recently signed a memorandum of understanding with the government to carve out a sphere of influence in the eastern Mediterranean. Turkey’s deepening involvement in Libya is part of an effort by international powers to shape the outcome of the country’s civil war. In September 2019, Russian mercenaries were deployed in Libya to support Gen. Khalifa Haftar in his bid to overtake Tripoli.

Al-Shabab attacks in Kenya. The Islamist militant group Al-Shabab launched an attack on U.S. and Kenyan personnel at an air base near the border with Somalia on Sunday, killing one U.S. service member and two U.S. contractors. The U.S. Africa Command announced that the attack was successfully repelled by U.S. and Kenyan forces, and Kenyan Defense Forces spokesman Lt. Col. Paul Njuguna said they had killed five al-Shabab militants. The attack comes days after AFRICOM launched three airstrikes on al-Shabab targets in Somalia, killing four militants.

Afghanistan ambassador out. U.S. Ambassador to Afghanistan John Bass is stepping down after just two years in the position, he announced on Monday. State Department officials said short stints in the Afghanistan post are common due to the stressful nature of the job, but the timing is peculiar given the imminence of a peace deal between the United States and the Taliban. Bass will be replaced by career diplomat Ross Wilson. It is unclear where he will be reassigned after he formally leaves his role in the coming weeks.

Chewning to leave DoD. Eric Chewning, the current chief of staff to U.S. Secretary of Defense Mark Esper, is scheduled to leave his post at the end of January. He had served as acting Secretary of Defense Pat Shanahan’s chief of staff since Jan. 2019 and was selected to stay on after Esper took over. Chewning’s departure is the latest in a series of high-profile exits from the Pentagon in the last month.

Northwestern Syria investigation. Bombings of hospitals, schools, and other civilian infrastructure, legally off-limits in times of war, have intensified over the past year in northwestern Syria. Political tensions on the U.N. Security Council have limited the U.N. inquiry into the attacks. The New York Times takes a deeper look, finding that most of the attacks could be traced back to the Russian and Syrian governments.

The advantages of climate change? Russia is likely one of the countries that will be most severely affected by the climate crisis. President Vladimir Putin is skeptical of the science. But Moscow recently published a plan detailing how the country can adapt to climate change and “use the advantages” of global warming, from expanding agriculture to exploration in the melting Arctic region.

That’s it for today.

For more from FP, subscribe here or sign up for our other newsletters. Send your tips, comments, questions, or typos to securitybrief@foreignpolicy.com.

Dan Haverty contributed to this report.