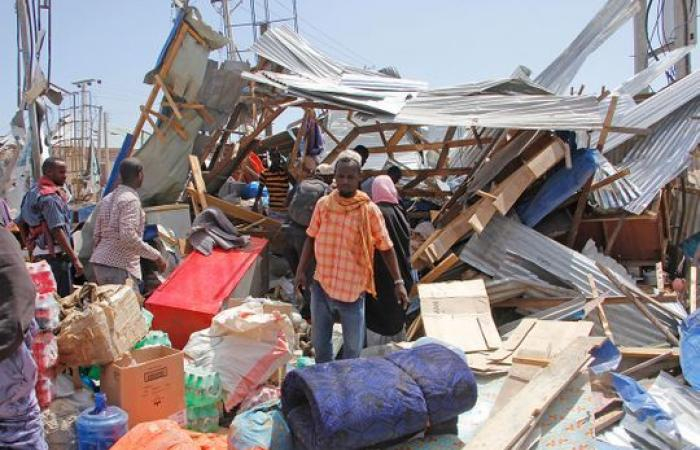 Thank you for your reading and interest in the news Truck bomb in Somalia's capital kills at least 61 and now with details Aden - Yasmin Abdel Azim - Somalis salvage goods after shops were destroyed in a car bomb in Mogadishu, Somalia, Saturday, Dec. 28, 2019. Image Credit: APMogadishu: Update: The director of an ambulance service in Somalia's capital says the death toll from a truck bombing has risen to at least 61. Abdiqadir Abdirahman, the director of Aamin Ambulance, says more than 50 people were wounded. A massive car bomb blast left more than 20 people dead and many others wounded in the Somali capital Mogadishu on Saturday, police and witnesses said. "The blast was devastating, and I could confirm more than 20 civilians killed, there were many more wounded, but the toll can be higher," said police officer Ibrahim Mohamed. "I have counted twenty-two dead bodies, all of them civilians and there were more than thirty others wounded, this was dark day," said Ahmed Moalim Warsame, who witnessed the explosion. The explosion occurred in a busy area prone to heavy traffic due to a security checkpoint and a taxation office. "This was a devastating incident because there were many people including students in buses who were passing by the area when the blast occurred," said another witness Muhibo Ahmed. Sakariye Abdukadir, who was near the area when the car bomb detonated, said the blast "destroyed several of my car windows." "All I could see was scattered dead bodies... amid the blast and some of them burned beyond recognition." Mogadishu is regularly hit by car bombs and attacks waged by Al-Shabaab Islamist militants allied to Al Qaida. The group was forced out of the Somali capital in 2011 but still controls parts of the countryside and has also staged attacks in neighbouring Kenya. Two weeks ago five people were killed when al-Shabaab attacked a Mogadishu hotel popular with politicians, army officers and diplomats in an hours-long siege.These were the details of the news Truck bomb in Somalia's capital kills at least 61 for this day. We hope that we have succeeded by giving you the full details and information. To follow all our news, you can subscribe to the alerts system or to one of our different systems to provide you with all that is new.

It is also worth noting that the original news has been published and is available at Gulf News and the editorial team at AlKhaleej Today has confirmed it and it has been modified, and it may have been completely transferred or quoted from it and you can read and follow this news from its main source.