The Kenya-Somalia Maritime dispute through 2019 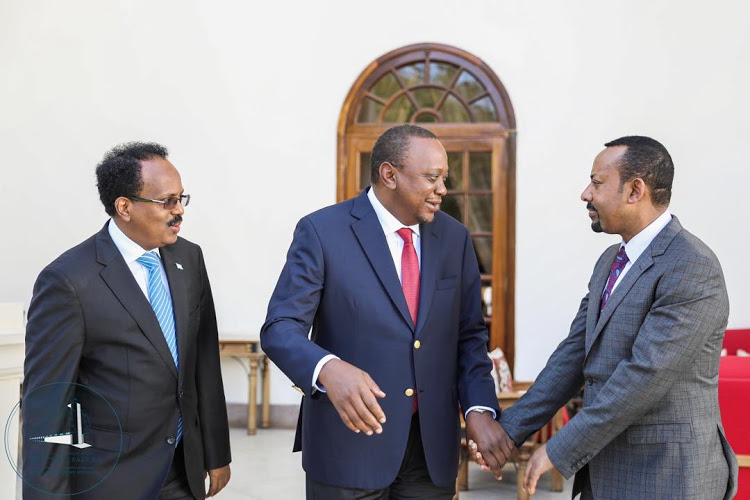 Kenya and Somalia have had a protracted dispute over a maritime boundary which escalated in 2014, when Somalia sued Kenya at the International Court of Justice.

The fight for resources by Somali leaders has put Kenya’s interests at risk, with the Somali Parliament pushing for the withdrawal of the Kenya Defence Forces.

Somalia’s top hierarchy for the last couple of years has tactfully been using other foreign countries, its Parliament and the executive to isolate and reclaim what Kenya believes belongs to her.

A report by the Kenyan security agencies tracking two Cuban doctors abducted on April 12 in Mandera stated that al Shabab terrorists have been breaking the wall at Balathawa. This is a key point for smuggling contraband, humans and arms.

The two doctors, Assel Correa and Landy Rodriguez, were sneaked out of the country through Balathawa, which is part of Jubaland.

This spat marks an escalation in a dispute that has been simmering ever since Somalia sued Kenya at the International Court of Justice in 2014.

Somalia is seeking a boundary review after claiming unlawful operations in her maritime territory, which is rich in hydrocarbons.

Kenya got alarmed when the Somali government displayed the oil and gas blocks within the Kenyan territory for auction in London.

The government complained formally but no action was taken.

The Foreign Affairs Ministry said Kenya has always pushed for diplomatic and peaceful resolution of the conflict by engaging in negotiations and submitting itself to the international courts processes.

The ministry maintained the country's claim over the disputed boundary area, saying it is historically Kenyan.

According to the Monica Juma-led docket, "it is regrettable that the neighbouring country chose the path of aggression despite Kenya having stood with it during many years of political and humanitarian hardships".

While Kenya wants the border to run along the parallel latitude southeast of Kyunga,  Somalia is pushing for a diagonal line down the Kenyan coast.

As the dispute escalated, Kenya declared Somalia an enemy state.

The strongly worded statement came short of declaring war between Kenya and Somalia, saying the generosity and good neighbourliness that Kenya practices are  being taken advantage of and that the country is ready to defend itself by all means necessary.

"Kenya is prepared and ready to defend its territorial integrity at any cost and considers all those directly or indirectly involved, whether Kenyan or non-Kenyan in encroachment of Kenya’s territory as enemies of the State and as adversaries of the Kenyan people," Macharia said. The PS said the move by the Somalia government was "an outrageous and a provocative act of aggression which would be met with unanimous and resounding rejection by all Kenyans and people of good will who believe in the maintenance of international law and order and peaceful and legal resolution of disputes."

As an immediate response, the PS in February this year announced that the Kenyan Ambassador to Somalia Lucas Tumbo had been recalled.

He added that the Somali Ambassador to Kenya Mohamud Ahmed Nur who presented his credentials to State House in December last year had also been ordered to leave Nairobi immediately.

Why Kenya and Somalia are fighting over ocean boundary

President Uhuru Kenyatta and Khayre met at State House, Nairobi, on January 29, where sources said the PM was asked to put the auction on hold.

Somalia, nevertheless, auctioned the oil blocks on February 7. Kenya then demanded that Somalia withdraws an incorrect map that it had issued at the time the supposed auction of oil and gas blocks in Kenyan territory happened.The Somali-Norwegian Prime Minister is spearheading the auction and has had interests in Soma Gas and Oil, where he was executive director for Africa until he resigned in 2017.Soma Gas and Oil is a private oil company that explores natural resources in Somalia. It’s registered in London. In 2013, it signed a contract in Somalia with the government to collect data on onshore and offshore oil. In exchange, the company had the right to apply for up to 12 oil blocks.But former Natural Resources minister Abdirizak Mohamed tweeted saying the dispute  has nothing to do with the Somali bid rounds conference in London.He said the dispute is rather a pre-emptive strategy to force Somali Government to open negotiations on the maritime dispute with Kenya or influence the outcome of the case before the International Court of Justice.But PS Macharia Kamau denied the claims. He said, “It is Somalia that took us to the ICJ. The case is still there. In any case, do you take your friend to court? It is better to discuss”.

In its judgement of February 2017, the ICJ decided to adjudicate the maritime dispute after negotiations between Kenya and Somalia failed.

Kenya wants the dispute be resolved through negotiations.

Lawyers said the maritime boundary is along a parallel of latitude as was decreed in the Presidential Proclamation of 1979.

In February 2017, Kenya lost the first round of the case to Somalia in its bid to stop the matter from going to full hearing.

Kenya 'will not cede an inch to anyone'

Since then, the government has maintained that it will not cede 'even an inch' of its soil to anyone or any state.

Foreign Affairs CS Monica Juma said the government is waiting for a response that meets the minimum threshold from the Somali government over the disputed oil blocks in the Indian Ocean.

Juma said though Somali had issued a statement disputing the claims raised, it is clear they did not deny the existence of a map that depicts the blocks are on Kenyan territory.

"We have noted with concern Somali's intention and plan to auction the oil blocks before January 2020 which is the effective date for sharing between the two countries," Juma said.

She added, "Kenya's position over this matter is inevitable and we shall not cede even an inch of our territory to anyone."

Somali in a letter addressed to the Foreign Affairs ministry said it is not offering, nor does it have any plans to offer any blocks in the disputed maritime area until the parties' maritime boundary is decided by the ICJ.

She said Kenya, however, remains committed to a peaceful resolution of the matter.

Her sentiments were echoed by government spokesman Cyrus Oguna who said Kenya is committed to defend herself from any form of aggression.

Oguna said if forced to by the neighbouring Somalia, it will have to deploy its KDF troops to the disputed oil fields in the Indian Ocean.

Oguna was responding to claims that if Kenya Parliament approves a motion to deploy KDF forces [in disputed maritime area], the Somali Parliament will vote the following day to approve a motion removing Kenya forces from Somalia. This came a week after Parliament through Majority Leader Aden Duale had debated on the possibility of deploying KDF to guard the disputed fields.

“The parliament is entitled to have such debates because territorial matters are of great concern. As a country we cannot just sit and let our territory be taken if we have to, we shall defend ourselves to safeguard every inch of our land,” Oguna said.

He however said the deployment of KDF is just a consideration which is surrounded by many other factors.

“Let it be known that Kenya as any other sovereign state has international obligation to defend its territory,” he added.

The status of the case

President Uhuru Kenyatta has maintained that Somalia should allow negotiations over the disputed oil field in the Indian Ocean.

While making the appeal when he addressed the General Debate of the 74th United Nations General Assembly in New York, Uhuru said Kenya remains committed to its pursuit of peace and stability in the region.

Uhuru  while congratulating Sudan and South Sudan for committing to a path of sustainable peace, challenged Somalia to consider dialogue and negotiation as an option for resolving the maritime  border dispute currently before the ICC.

"In the same spirit, my administration continues to reach out to Somalia in an effort to find an amicable and sustainable solution to the maritime boundary dispute between us," he said.

"In this regard, I welcome the decision of the African Union Peace and Security Council of 3rd September 2019 that urges both parties to engage."

But his Somalia counterpart Mohamed Farmaajo said the case would proceed to its full hearing.

However, the two leaders in November met and committed to safeguard Kenya-Somalia bilateral relations despite the divisive maritime dispute. Foreign Affairs CS Monica Juma said Farmaajo expressed his confidence that the ICJ issue would be resolved in a mutually acceptable manner and not affect  bilateral relations.

In September, the International Court of Justice  held off the hearing of dispute case after Kenya requested for more time citing the need to recruit a new defence team.

The hearing was then scheduled to start between November 4 and 8 though Kenya had sought a 12-month postponement.

In mid October, the court yet again postponed the case to September 2020.

"The court has duly considered the views and arguments of the Parties regarding Kenya's request. It has decided to postpone the oral proceedings to the week beginning Monday 8 June 2020," ICJ said in a letter to Attorney General Pual Kihara.

The Hague-based Court had already outlined conditions to journalists, diplomats and members of the public wishing to attend the hearings.