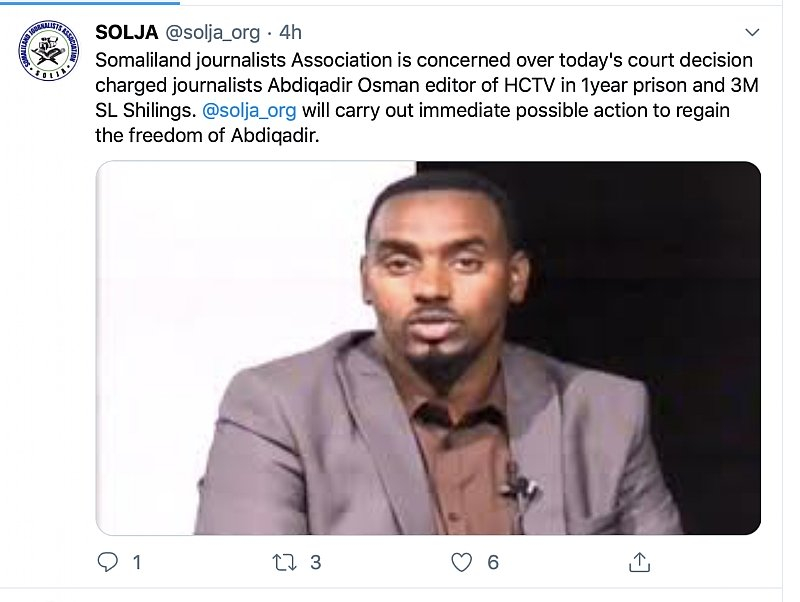 Somali Journalists Syndicate (SJS) is extremely dismayed by the unfair and politically motivated sentence of one year in jail and a fine of three million shilling (US$300) against Horn Cable TV editor, Abdikadir Saleban Asayr (Coday) overspreading propaganda against Egal International Airport by the Hargeisa-based Marodi Jeh Regional Court on Saturday 11 January, 2020.

The journalist’s colleagues, who were at the court told SJS that early on Saturday editor Abdikadir Saleban Asayr (Coday) was taken to the court where the government attorney read a charge sheet accusing the journalist of spreading propaganda against Egal International Airport. The government attorney was referring a news report on 2 November, 2019 about an air safety related incident involving Flydubai, a UAE-owned airline which reportedly complained against the services at Hargeisa’s Egal International Airport.Colleague journalists said the court hastily announced its verdict on Saturday. Lawyers representing Mr. Coday said they were preparing to appeal against the verdict.

Editor Abdikadir Saleban Asayr (Coday) was arrested on 18 November, 2019. A day later (19 November), Marodi Jeh Regional Court approved police request to remand him in custody for seven days and has remained in jail since.SJS is also concerned about the journalist’s health condition as he is reported to be suffering from cardiac problems and hypertension, according to colleagues and a member of his family.

“We are saddened to learn about the one year jail sentence and the fine of three million shilling against our colleague journalist Abdikadir Saleban Asayr (Coday) in Hargeisa by Marodi Jeh Regional Court. It is regrettable, despite Somaliland’s Constitution clearly guarantees freedom of the press, that still such scenarios continue to happen,” said Abdalle Ahmed Mumin, Secretary General of Somali Journalists Syndicate (SJS).