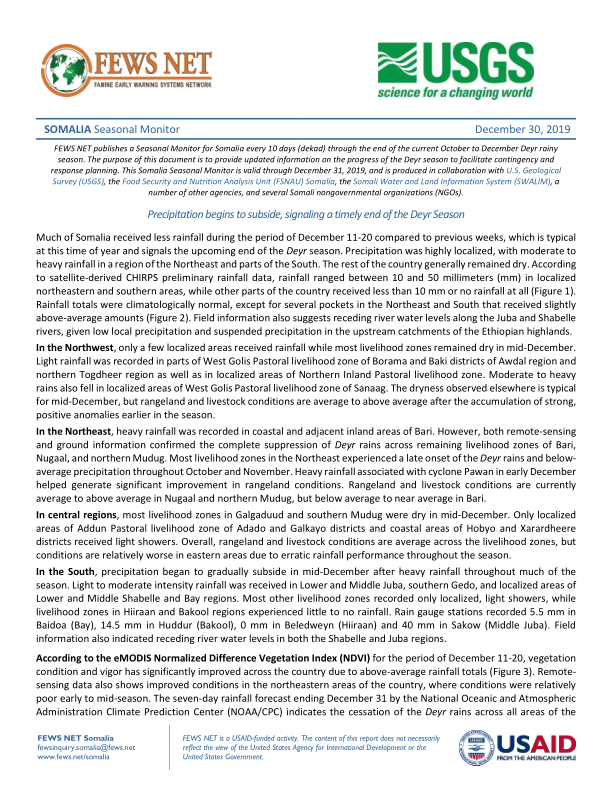 FEWS NET publishes a Seasonal Monitor for Somalia every 10 days (dekad) through the end of the current October to December Deyr rainy season. The purpose of this document is to provide updated information on the progress of the Deyr season to facilitate contingency and response planning. This Somalia Seasonal Monitor is valid through December 31, 2019, and is produced in collaboration with U.S. Geological Survey (USGS), the Food Security and Nutrition Analysis Unit (FSNAU) Somalia, the Somali Water and Land Information System (SWALIM), a number of other agencies, and several Somali nongovernmental organizations (NGOs).

Precipitation begins to subside, signaling a timely end of the Deyr Season

Much of Somalia received less rainfall during the period of December 11-20 compared to previous weeks, which is typical at this time of year and signals the upcoming end of the Deyr season. Precipitation was highly localized, with moderate to heavy rainfall in a region of the Northeast and parts of the South. The rest of the country generally remained dry. According to satellite-derived CHIRPS preliminary rainfall data, rainfall ranged between 10 and 50 millimeters (mm) in localized northeastern and southern areas, while other parts of the country received less than 10 mm or no rainfall at all (Figure 1). Rainfall totals were climatologically normal, except for several pockets in the Northeast and South that received slightly above-average amounts (Figure 2). Field information also suggests receding river water levels along the Juba and Shabelle rivers, given low local precipitation and suspended precipitation in the upstream catchments of the Ethiopian highlands.

In the Northeast, heavy rainfall was recorded in coastal and adjacent inland areas of Bari. However, both remote-sensing and ground information confirmed the complete suppression of Deyr rains across remaining livelihood zones of Bari, Nugaal, and northern Mudug. Most livelihood zones in the Northeast experienced a late onset of the Deyr rains and below- average precipitation throughout October and November. Heavy rainfall associated with cyclone Pawan in early December helped generate significant improvement in rangeland conditions. Rangeland and livestock conditions are currently average to above average in Nugaal and northern Mudug, but below average to near average in Bari.

In central regions, most livelihood zones in Galgaduud and southern Mudug were dry in mid-December. Only localized areas of Addun Pastoral livelihood zone of Adado and Galkayo districts and coastal areas of Hobyo and Xarardheere districts received light showers. Overall, rangeland and livestock conditions are average across the livelihood zones, but conditions are relatively worse in eastern areas due to erratic rainfall performance throughout the season.

In the South, precipitation began to gradually subside in mid-December after heavy rainfall throughout much of the season. Light to moderate intensity rainfall was received in Lower and Middle Juba, southern Gedo, and localized areas of Lower and Middle Shabelle and Bay regions. Most other livelihood zones recorded only localized, light showers, while livelihood zones in Hiiraan and Bakool regions experienced little to no rainfall. Rain gauge stations recorded 5.5 mm in Baidoa (Bay), 14.5 mm in Huddur (Bakool), 0 mm in Beledweyn (Hiiraan) and 40 mm in Sakow (Middle Juba). Field information also indicated receding river water levels in both the Shabelle and Juba regions.

According to the eMODIS Normalized Difference Vegetation Index (NDVI) for the period of December 11-20, vegetation condition and vigor has significantly improved across the country due to above-average rainfall totals (Figure 3). Remote- sensing data also shows improved conditions in the northeastern areas of the country, where conditions were relatively poor early to mid-season. The seven-day rainfall forecast ending December 31 by the National Oceanic and Atmospheric Administration Climate Prediction Center (NOAA/CPC) indicates the cessation of the Deyr rains across all areas of the country, except for a pocket of moderate to heavy rainfall off coastal areas of the Northeast. This signals the timely end of the season and reflects climatology for this time of year (Figure 4).