A car bomb has exploded at a busy security checkpoint in Somalia's capital, killing scores of people. The city has suffered regular terrorist attacks in recent years. 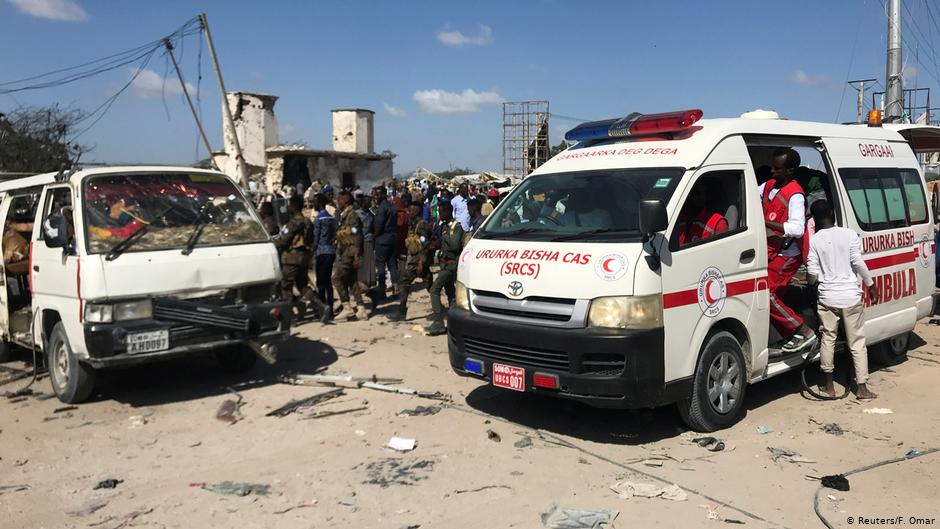 A car bomb has exploded at a busy security checkpoint in Somalia's capital, killing scores of people. The city has suffered regular terrorist attacks in recent years.

More than 30 people were killed in Mogadishu on Saturday when a car bomb was detonated at a busy security checkpoint in the Somali capital. A government spokesman warned the death toll will likely rise. At least 90 civilians, mostly students, were injured in the blast at the security and taxation checkpoint, Mogadishu Mayor Omar Muhamoud told reporters at the scene. Security official Abdulahi Adan told the AFP news agency the blast came from a suicide bomb in a truck. "Dozens of injured people were screaming for help, but the police immediately opened fire and I rushed back to my house," a witness told Reuters news agency. No one immediately claimed responsibility for the attack, however, similar attacks are regularly carried out by the Al Qaeda-linked Islamist group al Shabaab, which wants to topple the United Nations-backed government in Somalia. A minibus full of university students was reportedly among the victims Local journalist Abdulaziz Billow told DW the attack bore all the hallmarks of the group's attacks. He said it was the deadliest attack so far this year.  Billow said the victims included university students, other civilians and security personnel.  The extremist group was forced out of the capital city several years ago but continues to target high-profile areas such as checkpoints and hotels.  Two weeks ago, the group attacked a hotel popular with politicians, army officers and diplomats, killing five people.  Somalia has suffered through violent conflict since 1991 after clan warlords overthrew dictator Siad Barre and then turned on each other. In recent months the government has claimed that the security situation has improved, with increased security personnel and surveillance. aw/sms (AFP, Reuters, AP) Every evening, DW's editors send out a selection of the day's hard news and quality feature journalism. You can sign up to receive it directly here.