Move informed by trespassing of Somali and Jubbaland forces in Mandera. 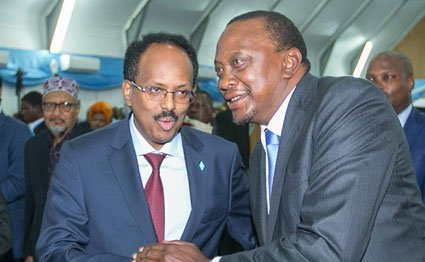 Somali President Mohamed Farmaajo last evening agreed to Kenya’s invitation to visit Nairobi, signalling the calming of tensions that rose last week on Monday.Mr Farmaajo, who received President Kenyatta’s special envoy and Interior CS Fred Matiang’i in Mogadishu indicated he would meet with the Kenyan leader although the actual date was not announced.

It followed a meeting between President Farmaajo and Dr Matiang'i's delegation where he presented an invitation from President Kenyatta.

A statement issued by Villa Somalia, President of Somalia’s official residence, said the Somali leader had accepted Mr Kenyatta’s call for a meeting in Nairobi.

Dr Matiang’i and his group of security chiefs had been sent to Mogadishu Sunday morning as a delegation meant to iron out the recent row in Mandera which saw Somali National Army troops battle Jubbaland forces on Kenyan soil.

Sending the CS was departure from tradition where the President assigns diplomats as emissaries. The CS is seen as a man with no previous baggage on the Kenya-Somalia row, according to former MP and former presidential legal advisor Abdikadir Mohamed.

Kenya has had rocky relations with Somalia since the maritime boundary case at the International Court of Justice became active under Farmaajo. Diplomats from the Foreign ministry and officials at the Attorney-General’s office have been the ones handling it.

But Farmaajo has always demanded that the issue of the boundary be isolated from other bilateral issues, as the ICJ will make final arbitration.

The fighting by forces traditionally united against Al-Shabaab terrorists saw Kenya and Somalia accuse each other of territorial integrity violations.But pressure from the US, and a subtle mediation by Ethiopian Prime Minister Abiy Ahmed saw the two leaders speak on phone on Thursday last week, with Farmaajo announcing that committees would be formed to discuss border security.

A source said that following the request by the US, which has funded the SNA, the Prime Minister called Farmaajo and asked him to speak directly with President Kenyatta.The ICJ, meanwhile, will hear, and decide, the case in June but remains uncertain whether that will close the chapter on the issue that has put the two neighbouring states at loggerheads, especially since there are political connotations to it.

The Somali statement did not mention ICJ nor another issue: that of fugitive Jubbaland security minister Abdirashid Hassan Abdinur JanaanJanaan fled jail in Mogadishu and he is the reason Mogadishu deployed troops in Gedo near Mandera. Farmaajo accused Kenya of refusing to hand him over.