He wants to become the first man in the country to be re-elected. 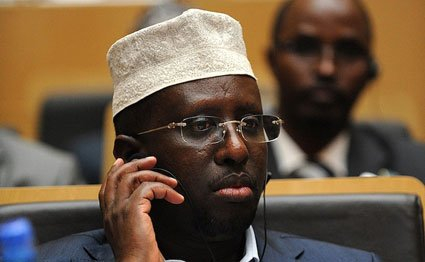 Somalia’s ex-President Sheikh Sharif Ahmed was an accidental politician. Now he wants to become the first man in the country to be re-elected.A graduate of law from a Libyan university, Ahmed was a teacher before plunging into Somalia’s civil war, and later politics.

Many consider him the father of Somalia’s modern history after his role in moving the transitional state to a federal government.

Yet he is a bitter critic of the current government.“Authorities have failed to establish a security plan to deal with deadly attacks in Mogadishu,” he told the Nation through a spokesman.“

The government should accept its failures in protecting citizens from Al-Shabaab,” he added, referring to car bombs last month, one of which killed 85 people.

The raids seem to have galvanised his desire to get back the seat he left in 2012, after leading the transitional federal government from 2009.In 2019, he mobilised six political outfits to form the Forum for National Parties (FNP), becoming the first coalition in independent Somalia.FNP includes his party Himilo Qaran, Ilays and the Union for Peace and Development led by ex-president Hassan Sheikh Mohamud. Others are the Progressive Party led by former ministers Sharif Hassan and Abdiweli Haas; Peace Party, chaired by former Jubbaland president Mohamed Abdi Gandhi; and Kulan Party, under Mohamed Siriin.

“Having strong political parties is the best way forward,” he said.“Somali people need to be empowered to govern and defend themselves from Al-Shabaab.”

Whether a coalition can hack it in a Somalia that has for the last 15 years been run on clan politics will be a test. But the greater question is whether an election will be held, and if it will be one-man, one-vote.And there are challenges. Somalia needed to pass a new constitution, register voters and plan for a countrywide poll when federal states are pulling in opposite directions.But the biggest is the Shabaab. In the past one year, the group has detonated car bombs almost every week, killing and maiming thousands.Ahmed thinks he can use an old tool to fight them.

When FNP was formed, the coalition said it would demand that the vote not be delayed and that it could create a better security policy.“He is the right person to lead Somalia. Under his leadership, Shabaab were driven out of Mogadishu,” said Mohamed Hassan Idriss, a federal MP.“If the government were serious, Al-Shabaab would have been dismantled. We suspect the group is getting help or some form of cooperation from the government.”Hussein Arab Essa, another Federal MP, said Ahmed’s community policy helped defeat the group.

“Locals shared information because they saw what he was doing,” Essa said.“There were no roadblocks during that time. People moved freely as they had nothing to fear.”The government denies claims that it allows Shabaab fighters to roam freely. But there have been reports of infiltration into state institutions.

Ahmed’s rise to political stardom started in 2003. After joining the Union of Islamic Courts (UIC), he rose through the ranks, becoming the leader of the group that rebelled against warlords accused of working with Ethiopian forces to kidnap locals.Ahmed led militants to fight US-backed Ethiopian forces in Somalia but later fled to Yemen through Kenya. In a 2007 interview with Al Jazeera, he said Kenya helped his rise to power.“Our relation with Kenya was not that bad. Even though it supported the transitional government of President Abdullahi Yusuf, Kenya sent me a plane. I flew to Nairobi and then to Yemen,” he said, referring to the defeat of the UIC.“

Kenyans understood the UIC was a national force. Some government officials had a different opinion but the majority of Kenyan authorities saw the UIC as a force that they should have contact with.

”He later oversaw the formation of the Alliance for the Re-liberation of Somalia in Asmara, Eritrea, in September 2007. It included Sheikh Sharif, Dahir Aweys, former Speaker Sharif Hassan Sheikh Aden and former transitional government deputy PM Hussein Mohamed Farah.In 2009, he defeated 16 opponents in a presidential election, following negotiations in Djibouti.Suddenly, an opponent of Ethiopia was now its ally.

Ahmed’s win was largely because of support from Addis Ababa and Nairobi.Critics opposed his brand of politics during the days UCI ran Mogadishu, saying it was a Taliban-like administration.In an alliance with the African Union Mission in Somalia (Amisom), Ahmed’s forces drove Al-Shabaab further into the country’s interior.