They also kidnapped an 80-year-old man and his son, using them to identify homes of reservists. 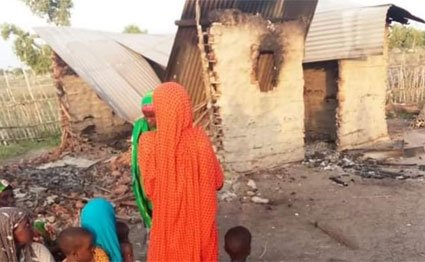 The attack comes a day after a police reservist was killed around the same area.

According to police reports, the attackers first abducted two people, a father and son, and used them to identify the reservists' houses before later releasing 80-year-old Mohammed Bashir Mursal. His son, Abdi Mohammed, is said to still be missing.North Eastern Regional Co-ordinator Nicodemus Ndalana confirmed the 9 pm incident which happened in Gedilun village."...Some individuals attacked a village yesterday before abducting two people who they may have used to identify the homes of the police reservists before burning," he told the Nation. The regional police boss stated that security forces were immediately dispatched to the area following the attack but could not establish the route the insurgents might have taken due to reluctance by the locals to provide information on the attackers.

Mr Ndalana said that they have resolved to engage with area leaders to speak to locals on the importance of working closely with the security agencies, which he said is vital in the war against the Al Qaeda-linked militant group.

Area Member of parliament, Sofia Abdi Noor, said the attackers also beat up locals and afterwards left around 4 a.m on Thursday morning.“They were blaming us saying we allowed our sons to join the KDF army,” explained Ms Noor during an interview with the Nation.

“The father is still in shock, he cannot even utter a word from his mouth. He was beaten before being released,” said the MP.The son is said to be around 30-years-old.They said the suspected attackers were going round preaching to locals and asking them not to reveal their presence to security agencies.

“They were 12 of them and were armed with weapons,” said one of the residents Mariam Ibrahim.The attackers were reported to have been depending on three donkeys for mobility and shared a water point with the locals.

Another resident who did not want to be named said: “The group walks around with AK-47 assault rifles and RPGs (rocket-propelled grenades) and when they come to fetch water, some of them act as guards.”

The source also said that a vehicle has been seen supplying food to the militants.It is suspected the vehicle comes from Garissa County.

Mr Ndalana warned local Shabaab sympathisers that the government will catch up with them. "Like yesterday our officers were waiting for them but it appears some locals might have tipped them off about our plans," he said."Every small plan they are getting is because they are being told by people on the ground."

Mr Ndalana further said that the war against Al Shabaab was getting more complex as the Somalia-based militants continue to modify their modus operandi.He gave the example of an attack two days ago where the militants were masquerading as herdsmen.

WHY RESERVISTS ARE TARGETED

This is the third attack in a span of one week targeting police reservists.

Mr Ndalana said the militants are now targeting NPRs because they believe they are providing intelligence to security agencies on their whereabouts, which he said had helped reduce attacks. Six days ago, an 80 year-old man was killed after suspected Shabaab militants attacked Sangole village in Ijara sub-county.The victim, the father of an NPR, was killed as 'punishment' to the son for working with the security forces.

The area MP, Ms Noor, has urged the government to work on a strategy that will handle the attacks.“Ijara area has been affected greatly. We are losing lives and services are not doing good. The attackers are a small number of group. If we stand together as a country and defend our land we can manage the situation,” she said.

Counties in the northern and coastal regions have borne the brunt of frequent attacks from Shabaab militants due to their proximity to Somalia's border.

Northeastern activist Simba Hashem Gedow said the frequent attacks are rarely reported especially by mainstream media. “The attacks are making northern Kenya territories of Mandera, Wajir and Garissa unsafe for basic service delivery. We urge our northerners to remain vigilant and report these terrorists to law enforcement agencies. We should not allow Al Shabaab to subdue us into silence either,” he said.