SALAMI: Refugees contribute towards a better society for they

Everyone can do their part to ensure that all refugees have a chance to feel visible. 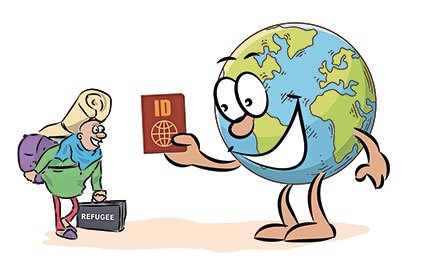 By CLEMENTINE NKWETA-SALAMIMore by this Author

Uganda, Ethiopia, Sudan, Kenya and Somalia host the majority of the six million refugees on the African continent. I have witnessed first-hand the devastation of being forced to flee your home and live in exile, sometimes for decades.I have also seen the generosity and humanity of communities, often impoverished themselves, who welcome their African brothers and sisters sharing what little resources they have.It is in this environment that nearly all member states of the United Nations General Assembly agreed to the Global Compact for Refugees last December.The compact is a blueprint for states, non-governmental organisations, UN agencies and the private sector to ensure that refugees and host communities get the support they need and deserve.It is a commitment to address the global refugee crisis in a new, more comprehensive and holistic way; one that acknowledges this crisis needs solutions and is a responsibility we all must share.Long-term solutions

Countries in the East and Horn of Africa were pioneers in this approach, making commitments even before the Global Compact was adopted. In March 2017, Igad signed the Nairobi Declaration, pledging to find long-term solutions for Somali refugees in the areas of education, livelihood and protection of asylum space.Since then, Igad members have gone even further, agreeing to standardise education for all refugees across Eastern Africa by 2020 with the Djibouti Declaration signed in December 2017 and to expand economic and work opportunities with the Kampala Declaration signed earlier this year.These declarations are more than signed documents—they are changing the reality for refugees on the ground.Uganda has gone beyond its long-standing policy of giving refugees land, allowing freedom of movement and the right to work and own businesses, as well as including refugees in their national education and healthcare plans. Kenya’s Kalobeyei settlement has an innovative shelter project, giving refugees cash to build their own homes and hiring local community contractors which is contributing to the Turkana economy.In Somalia, the government has been making strides in improving governance and infrastructure, even as the country rebuilds after decades of instability and continued security challenges. Elsewhere in the region, countries are also doing their part to include refugees. In Rwanda urban refugees are able to work and own businesses and have access to the national healthcare system. The country also continues to show solidarity by hosting vulnerable refugees who have been evacuated from deplorable conditions in Libya.Last year while in Ethiopia, I watched Angakuny, a South Sudanese baby, only just a few days old, receive his birth certificate thanks to a new law that allows refugees to register their vital life events, open bank accounts and in some cases receive work permits. His mother visibly relieved that that her child had a document that would allow him to be included in society.I also witnessed the dramatic transformation to the Dollo Ado region which hosts more than 200,000 Somali refugees, thanks to support from donors and a large-scale donation from our private sector partner, the IKEA Foundation. Funds were used to build irrigation systems, train farmers, provide small business loans, and create sustainable energy solutions. It is not a handout but an investment, that continues to pay off. As a result, for both refugees and the Ethiopian host community, school enrolment rates are up, malnutrition rates are down, and youth employment is growing. I actually tasted the fruit of the farmer’s labour, sampling some delicious watermelon that both refugee and local farmers now export all over the country.These landmark changes in policies, programmes and projects were part of the focus last week’s Global Refugee Forum held in Geneva. As the first world gathering on refugees, it brought together leaders in governments, businesses, civil society, humanitarian and development organisations, along with refugee representatives to take stock, share experiences and ideas, and to act.The forum focused on economic opportunities, education, environment, protection, solving refugee situations, and how countries can better co-operate for solutions regionally and globally.Private sectorBut it was more than a meeting of ideas; significant pledges from both states and the private sector were made. These commitments will continue to improve the everyday lives of refugees and the generous communities hosting them.The Global Refugee Forum is not a one-off event, it will serve as a starting point for how we, as a world, will continue to address refugee responses for the next four years and beyond.After so many decades of refugees living in limbo, and of a small number of countries harbouring the care and well-being of people forced from their homes without adequate global support, it is clear the status quo can no longer remain.As this region knows, perhaps more than any other in the world, the time to recalibrate the global response to displacement is now. Everyone counts, and everyone can do their part to ensure that all refugees have the chance to feel visible and contribute to a better society.Clementine Nkweta-Salami is Director of UNHCR’s Regional Bureau for the East, Horn of Africa and Great Lakes in Nairobi, Kenya. She has served with UNHCR for over two decades working in complex humanitarian situations having previously held the positions of Representative for UNHCR in Ethiopia and Burundi, Assistant Representative (Protection) in Guinea, and as Regional Representative for Southern Africa.Unicef regional director for Eastern & Southern Africa