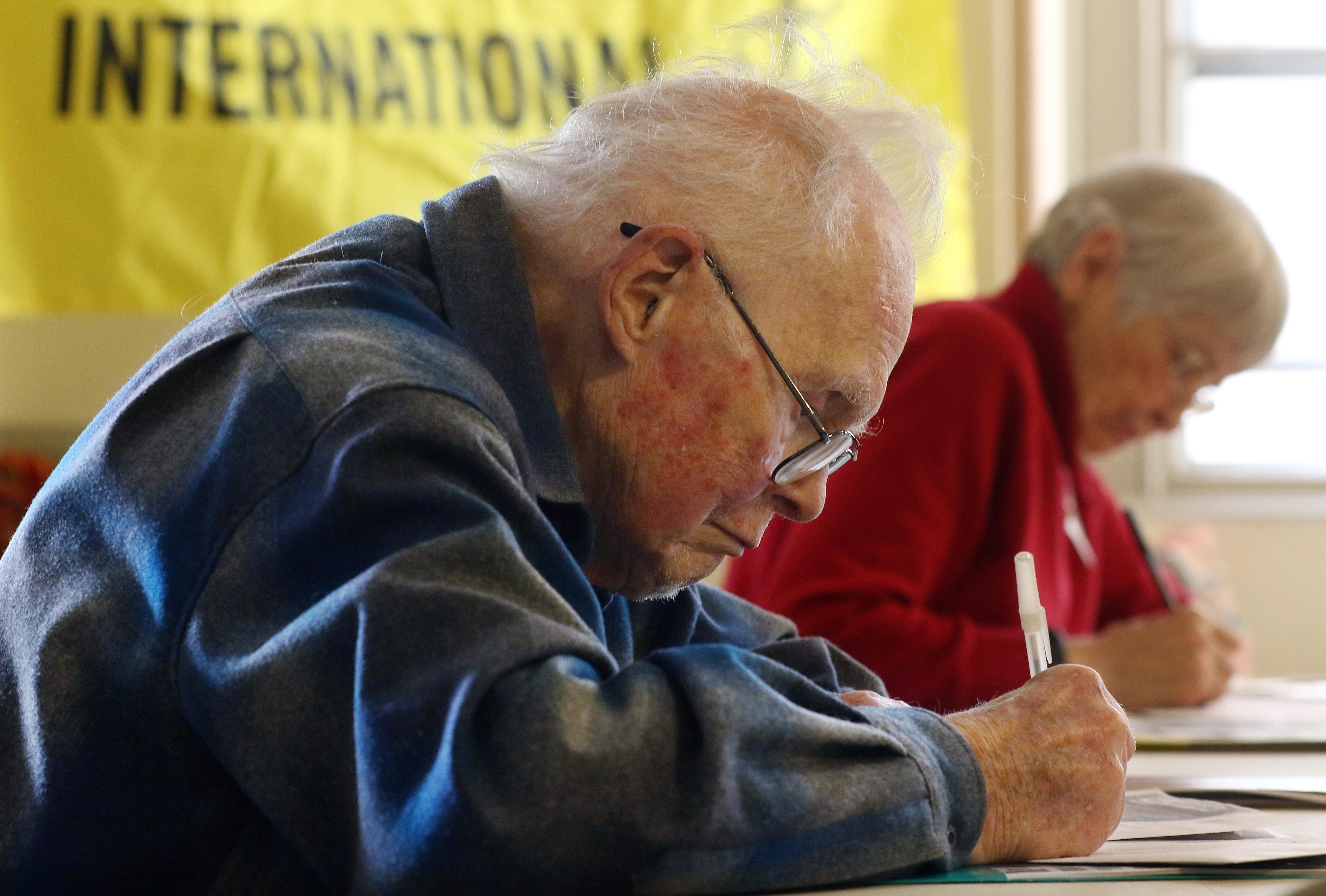 PROVIDENCE — Reporters were cautioned at the beginning of Amnesty International’s annual “Write for Rights” letter-writing session Sunday afternoon to avoid taking photos or using the names of the two doctors who fled Syria just before a crackdown on the medical profession.One of the doctors in the assemblage at First Unitarian Church told his story while volunteers wrote letters asking heads of countries to free or provide medical care to prisoners of conscience.Both doctors still have relatives in Syria who could be arrested, jailed, raped or tortured to death if the refugees were identified, or if they said something critical of the regime.But an hour before the session ended, one of the doctors decided he wanted his name used and his photo published, partly to help his chances for asylum in the United States and possibly also as an act of defiance, or because oppressive regimes grant a form of immunity to dissidents known to the press. About four hours later, his sister, also a doctor, called to say she wanted her name used, too. Both know they can never return to Syria.“For me as a Syrian, I am very fortunate to speak,” said Abdullah Kanaan, 34, who said he has waited four years to hear whether he’ll be given asylum. Any criticism “is a crime when it’s spoken against the regime.” In Syria, he said, “Walls have ears. You can’t even mention the name of the president” or complain about prices in the market “without having fear” that there will be a knock on the door. He told of one young dissident being thrown from an upper floor of his home “in front of his mother’s eyes.” His cousin, he said, got that knock on the door and was shot three times in the chest.His sister, G. Kanaan, also a physician from Syria, said she had been asked several times to join the political party of President Bashar al-Assad. Each time, she refused, she said, because the party can overrule a doctor’s medical and ethical decisions and order a different treatment or medicine for a patient. “That’s why I left my country.”Introducing the two Syrians and a woman from Somalia was Mohammad H. Fallahiya, 44, the 2012 speaker. He and his wife and son live in Warwick. He had served three years in a prison in Tehran, he said, six months in solitary confinement, for criticizing Iran’s supreme leader, Sayyid Ali Hosseini Khameinei. Upon release, he began publishing criticisms on social media; he was warned and refused to take them down. This time, his wife learned of his imminent arrest, and he fled to Turkey. Eventually he was able to settle his family in Rhode Island.In the church, at Benevolent and Benefit streets, about 30 volunteers wrote and signed an estimated 250 to 275 letters on Sunday. Amnesty International provided preprinted envelopes addressed to the proper government official for each prisoner. Turnout was lower this year because the date was moved from early to late December.Ubah Kahiye spoke next, from her wheelchair. She had lost the use of her legs at age 10, when her home in Somalia was bombed. She was in a coma until she survived a second bombing. A body from an upper floor landed on her. Fatherless since the age of 3, she said she witnessed the murders of her uncle, four sisters and extended family. Her stepfather was killed with a knife, she said, not by stabbing but by cutting off extremities one by one to inflict the most pain. Her mother and four sisters are still in Somalia.Unable to get proper food and medical care in Somalia, Kahiye noticed parasites in the wounds of her legs. She was sent to a camp in Kenya built for refugees from Somalia and Sudan. Medical care in the camp was little better, but she was registered with the United Nations. Eventually, she was interviewed for placement in the U.S., U.K., Canada or Australia, and she experienced a miracle, being approved for the United States.Often, she said, people ask how she keeps her spirits up, living alone, using a wheelchair, and speaking very little English. “I am free!,” she said, her face brightening. “I am safe!” — dnaylor@providencejournal.com(401) 277-7411On Twitter: @donita22