The two businessmen, who were freed on December 27, appeared in good health though tired, he said. They were ferrying miraa to Liboi when they were ambushed by the militants and taken to Somalia. 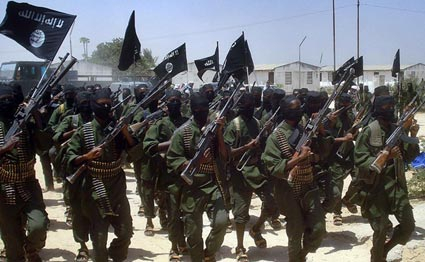 Kenyan security forces have launched a manhunt for al-Shabaab militants behind the abduction of two Kenyans in Liboi area along the Kenya-Somalia border.

Garissa County police commander Alfred Angengo said the two businessmen, Abdullahi Issack Harun and Abdi Hassan Ilkaase, who were kidnapped by about 20 Shabaab militants on December 26, were traced and arrived at the Liboi police station on Sunday.

He said only three militants boarded the vehicle in which the two businessmen were traveling and proceeded with the captives to neighbouring Somalia. "Only three of the al-Shabaab militia proceeded with the captives to Somalia at a place called Bagdad, 60 kilometres from Hosingo, to the east where they have established a camp and hoisted a black flag," Mr Angengo said in a statement.

The two businessmen, who were freed on December 27, appeared in good health though tired, he said. They were ferrying miraa to Liboi when they were ambushed and taken to Somalia.

Mr Angengo said security forces will conduct operations along the border areas to flush out militants believed to be planning attacks in the region. "It is evident that the rest, who were more than 15 al-Shabaab, remained within Liboi Walburat and Daddquran Dam and are planning to plant improvised explosive devices, attack police camps, lay ambush to police vehicles, attack non-locals traveling by buses," he said. The abduction came two weeks after militants ambushed a Garissa-bound commuter bus and killed 11 people, including 8 police officers.