When it crashed on July 2, 2014, the plane was destroyed on impact and burst out in flames soon after, killing all four crew members aboard. 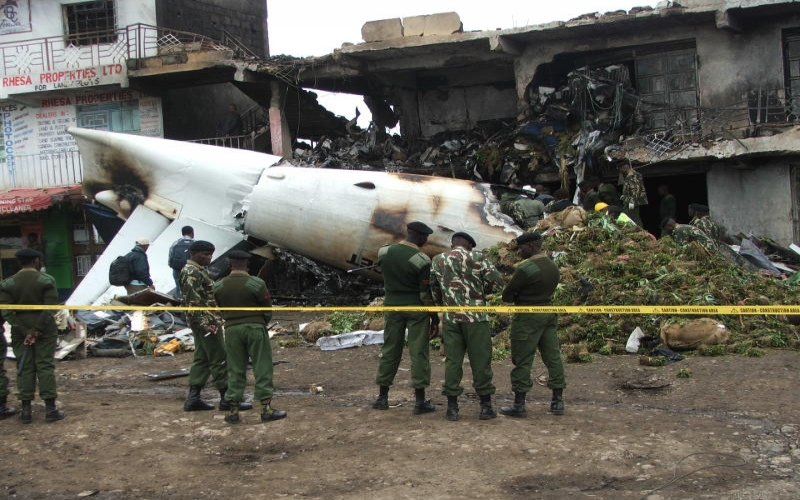 Security personnel at the site where a cargo plane ferrying miraa to Mogadishu in Somalia crashed on July 2, 2014. It caught fire on impact, killing all the four crew members. (File, Standard)

Now, a new, damning report by the Air Craft Accident Investigation Department (AAID) has concluded that the cause of the fatal accident in which four crew members died was as a result of the crew’s choice to fly a faulty aircraft.

“The probable cause of the accident was the decision by the crew to conduct the flight with a known mechanical problem and their failure to abort or reject the takeoff after receiving twenty seven cautions,” the report reads.

Last momentsSEE ALSO :Tussle over burial of five Ethiopian plane crash victims The plane was on its way to Aden Adee International Airport in neighbouring Mogadishu, Somalia. When it crashed, the plane was destroyed on impact and burst out in flames soon after.

The investigative report now reveals the last moments of the plane that were plagued by inconsistencies from the beginning of the early flight.

“The investigation revealed that on ground roll for takeoff, the aircraft seemed to take longer runway than anticipated before attaining the take-off speed,” the investigation report reads. “The airplane departed runway 06, barely climbing and attained not more than about 50 feet above ground level.”

For More of This and Other Stories, Grab Your Copy of the Standard Newspaper.

The flight path continuously deviated left of the runway before the aircraft eventually collided with a building about 2.1km north-northeast of the runway departure end.

Data from the voice recorder revealed that before the crash, audible warning signals sounded off in the cockpit just eight seconds after taking off. This was followed by visual warning alerts, some at one second intervals.

SEE ALSO :Lake Nakuru chopper crash bodies yet to be found“Despite the various alerts (about 27) the flight crew continued the takeoff. The flight data recorder showed that the revolutions per minute (rpm) of the No. 1 propeller reduced from 100 per cent to 50 per cent where it stabilised at for the remainder of the flight. The decrease in propeller RPM corresponded with an increase of the No.1 engine torque to about 110 per cent along with the occurrence of the aural warning alerts.”

The report further says the audio and visual warnings ought to have been enough for the crew to abandon the flight. It says the 27 alerts sounded as the plane was on the runaway, rolling towards takeoff.

“The crew continued with the flight with a known fault,” the report reads. “There is no evidence that remedial maintenance action was taken from landing from a prior flight that was completed amidst warnings from the on-board warning systems.”

Even with this, the report continues, there was no evidence of the issues experienced in the previous flight being captured in the aircraft technical log.

“Flight recorder data indicated that the alerts had occurred previously but AAID was unable to get any evidence that the anomaly was recorded on the technical logbook neither that any maintenance actions had been performed in regard to the same,” the report reads.

SEE ALSO :After Boeing crashes, jet design rules set to get tougher for allExcerpts from the on-flight recorder also point to the suspicion by the crew that things were not going as they ought to have been.

CAPTAIN: Is it really going?

CAPTAIN: Is it going really? Is the aircraft really moving?

At this point, one of the engines had suddenly lost torque.

CAPTAIN: It is not giving power.

About six seconds afterwards, the First Officer says, “We can also turn back.” About three seconds later the first of seven “don’t sink” warning alerts begins to sound and plays out over a period of 23 seconds.

After the second alert the Captain asks: “Ok, we’re ok?” After the third alert, the First Officer again says: “We can turn back.” The Captain immediately responds.

After the fifth GPWS alert, the conversation between the two men in the cockpit resumes.

CAPTAIN: And this one is showing one fourteen…we can turn back?”

About two seconds later, the First Officer calls out.

CAPTAIN: But this one has nothing.

About one second later and about the time of the sixth alert, JKIA control tower radios the plane.

The seventh warning sound went off and ended about thirteen seconds later.

CAPTAIN: Tell him…tell him we have no power.

The transmission to the tower abruptly ends but the on-flight recorder continues picking up various sounds of distress from the crew.

The plane then flies into a single storeyed commercial building, damaging it substantially from the impact and the ensuing fire.

Investigations into the crash also indicate an anomaly with the cargo of the plane.

“Most of the cargo, approximately 70 per cent, at the site was collected for weighing. The cargo, khat, is a mild stimulant and the possibility that some of it was burgled at the site may not be ruled out. The cargo that was collected weighed in at 5.52 tonnes,” reads the investigation report.

The flight manifest had indicated the weight of the entire consignment as 5 tonnes.

The report also notes that there was no evidence to demonstrate that any maintenance work had been performed on the aircraft since a Certificate of Airworthiness was issued on May 9, 2014.

The captain of the plane was a 54-year-old and held a valid airline transport pilot licence. He had about 14,531 total hours, including 13,397 hours as pilot-in-command (PIC).

He had about 6,821 hours accrued as PIC on the Fokker 50. The captain had flown the accident airplane about 77 hours during the previous 60 days.

The first officer held a commercial pilot licence. He had about 823 total hours, which included 513 hours second-in-command time accrued in Fokker 50. He had flown in the accident airplane about 18 hours during the previous 60 days.

The reports also says the crash was not survivable.

Do not miss out on the latest news. Join the Standard Digital Telegram channel HERE.