Opinion: Soleimani is dead, but his military tactics will live on

He, and the organization he led, were and are agile, adaptive and flexible, willing to learn from their enemies and to bide their time 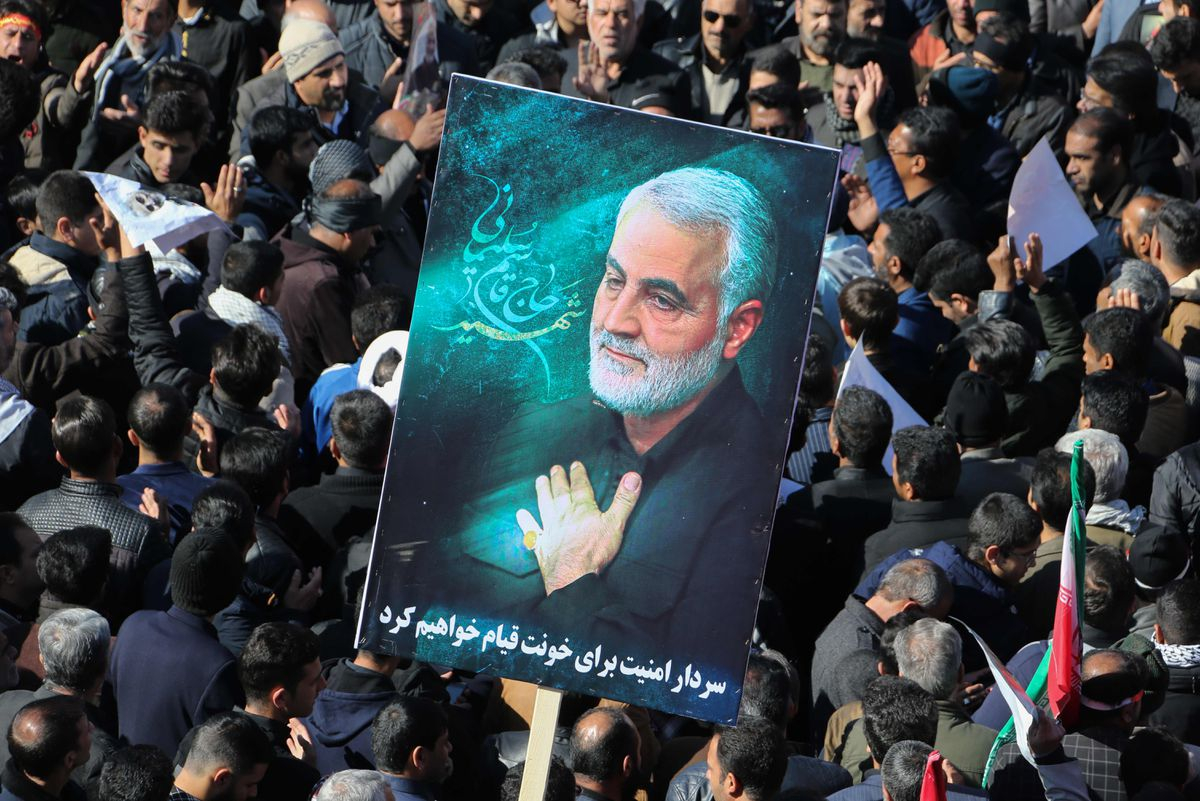 Iranian mourners gather during the final stage of funeral processions for slain top general Qasem Soleimani, in his hometown Kerman on Jan. 7, 2020.

David Kilcullen is a professor of international and political studies at the University of New South Wales, Canberra. A former Australian Army officer, he served with the U.S. State Department in Baghdad and Kabul and subsequently led research teams tracking the wars in Syria, Libya, Somalia and elsewhere. His new book, The Dragons and the Snakes: How the Rest Learned to Fight the West, will be published in March.

Qassem Soleimani – the Iranian general whose death last week triggered dramatically heightened tensions between Tehran and Washington – cut his teeth as a conventional commander on the front lines of Iran’s war with Saddam Hussein in the 1980s. Amid the horrors of trench warfare, poison gas and human-wave attacks into minefields, the young man (he was a divisional commander in the Revolutionary Guards by his mid-20s) showed intense devotion to Iran’s Islamic revolution. But he also became known for his loyalty to his fighters and their families – and his dismay at the loss of life in useless direct attacks against a conventional enemy.

For the rest of his career, he avoided that kind of conventional warfare, instead pursuing an indirect approach we might call the “Hezbollah model,” after its most prominent and successful example. Hezbollah, founded with Iranian money and advice after Israel’s 1982 invasion of Lebanon, initially used the human-wave tactics taught by their Iranian mentors, many of whom had been moulded by the war with Iraq. These proved costly failures in Lebanon, as they had in Iran, but Hezbollah fighters soon developed their own operational style – learning from and copying Israel and its allies, continuously adapting in what some analysts have called the “guerrilla laboratory” of southern Lebanon. They specialized in dispersed light infantry tactics, carefully concealed roadside bombs, stealthy hit-and-run raids, excellent mortar and rocket teams, human and electronic intelligence and blending into a background of complex human and physical terrain.

More important, Hezbollah created a full suite of social, financial, education, health and welfare services for populations in areas it controlled, using these to cement its supporters’ loyalty while winning over skeptical neutrals. It created labour unions and youth organizations, built mass-media outlets, including newspapers and radio and television stations, and formed a political party that sought election to Lebanon’s parliament. Combining lethal coercive means with administration, governance and persuasion made Hezbollah extraordinarily resilient. After the 2006 war with Israel, in which Gen. Soleimani participated, Hezbollah reconstruction and social-service teams succeeded in securing support for the group despite its defeat on the battlefield, so it came out of the war stronger than before.

Gen. Soleimani and his colleagues in the Quds Force (the external covert action arm of the Revolutionary Guards) were agile enough to learn from their Lebanese protégés, going on to apply the Hezbollah model elsewhere – most notably in Iraq, Syria and Yemen.

During the war against the U.S.-led coalition in Iraq, Iranian-backed militias fielded extraordinarily sophisticated roadside bombs that killed at least 603 Americans and caused as much as 20 per cent of all coalition casualties. They mastered the art of speedy and accurate rocket and mortar attacks on coalition bases, often managing to shoot and scoot before retaliation could arrive. And they created the same humanitarian, governance and welfare systems and persuasive media tools as Hezbollah. Quds Force trainers under Gen. Soleimani were known to bring in Hezbollah advisers, while separately running “secret cells” of operatives who engaged in intimidation, subversion and assassination to control Iraqi politicians and secure Iranian influence after the Americans departed.

In Syria a few years later, when Bashar al-Assad’s regime seemed on the edge of collapse, Gen. Soleimani and the Quds Force helped save Iran’s closest Arab ally. He spearheaded the effort to establish the National Defence Forces (NDF), a pro-government militia that supports the Syrian military and is modelled on Hezbollah. Working from a fortified compound in Damascus, Gen. Soleimani sponsored political, economic and military programs to shore up the Syrian state and brought Hezbollah directly into the conflict, with fighters crossing the border from Lebanon into western Syria to defeat anti-regime rebels.

After the 2015 nuclear deal improved Iran’s access to funds and gave Gen. Soleimani greater freedom of movement across the region, the stream of Iranian support became a flood. Mr. al-Assad’s success in recapturing almost all of Syria owes much to Moscow, particularly in terms of air support; but the key actors on the ground have been Iranians under Gen. Soleimani, with the NDF playing a big role.

When the Islamic State captured a third of Iraq in just 100 days over the spring and summer of 2014, the U.S.-trained Iraqi military and police quickly collapsed, allowing IS fighters to capture advanced military equipment, seize the city of Mosul and threaten Baghdad. In response, Gen. Soleimani and his Quds Force responded – in days, unlike the Western allies, which took months – sending advisers, weapons, money and equipment to help. Building on the “secret cells” and militias of the earlier conflict, he again used a Hezbollah-like model, standing up the Popular Mobilization Forces (PMF), similar to the Syrian NDF in their military role but including Hezbollah-like social, welfare and political services. The PMF played a key part in driving the Islamic State out of several cities and in the campaign to recapture Mosul. Today, the PMF operates in parallel with the Iraqi military, nominally under the Ministry of Defence in Baghdad, but acts as a semi-autonomous Iranian-backed irregular force on the ground, much like Hezbollah in Lebanon.

Likewise, in Yemen, when Houthi rebels captured the capital, Sanaa, drawing a military intervention from Saudi Arabia and other Sunni Arab states, Quds Force mentors gave the Houthis a Hezbollah-like mix of rockets, mortars, capable irregular troops and a suite of social, religious and administrative programs to corral the population.

All this implies that, despite Gen. Soleimani’s death and the apparent de-escalation in recent days between Iran and the United States, the option of direct conventional conflict is far from Iran’s first choice. Gen. Soleimani spent his career promoting indirect, asymmetric and unconventional operations, working through proxies and partners, pursuing political and economic warfare and creating a powerful model – learned initially from Hezbollah – to help non-state groups build state-like capabilities and compete (albeit indirectly) against overwhelming conventional adversaries. He, and the organization he led, were and are agile, adaptive and flexible, willing to learn from their enemies and to bide their time. The decentralized model he pioneered means that no individual, not even Gen. Soleimani himself, is indispensable. Thus, even as the dust settles from Iran’s missile strikes into Iraq, the real war – asymmetric and indirect – continues as it has done for years, in the twilight.

Keep your Opinions sharp and informed. Get the Opinion newsletter. Sign up today.