One US soldier, two defense contractors killed in militant attack on military base in Kenya

AL-SHABAB militants killed a US solider and two American defense contractors during an attack on a military base in Kenya. The US military confirmed the deaths and said another two Americans were w… 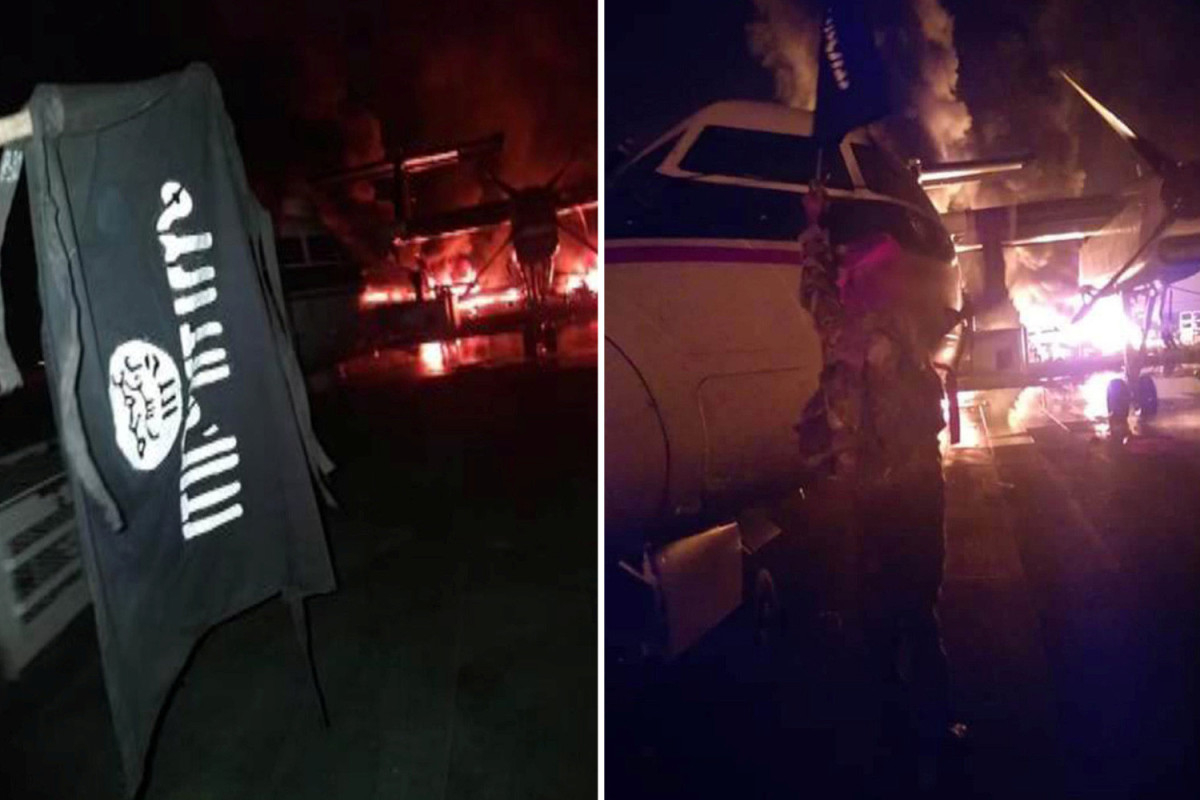 AL-SHABAB militants killed a US solider and two American defense contractors during an attack on a military base in Kenya.

The US military confirmed the deaths and said another two Americans were wounded after coming under fire for four hours at the Manda Bay Airfield in Lamu county, close to the Somali border.

5 An image distributed by Al-Shabab shows a militant standing in front of a burning aircraftCredit: Reuters5 The militant group released this picture of their flag claiming it was taken at the military base in KenyaCredit: ReutersThe US military's Africa Command (AFRICOM) said in a statement: "The wounded Americans are currently in stable condition and being evacuated."

Officials are not releasing the victim's names until the next of kin have been informed.

Army General Stephen Townsend, who is the commander of the US Africa Command, said: "Our thoughts and prayers are with the families of our teammates who lost their lives today.

"As we honor their sacrifice, let's also harden our resolve.

"Alongside our African and international partners, we will pursue those responsible for this attack and al-Shabab who seeks to harm Americans and US interests."

He added: "We remain committed to preventing al-Shabab from maintaining a safe haven to plan deadly attacks against the US homeland, East African and international partners."

Al-Shabab, which has been trying to over throw the Somali government for more than 10 years, claimed responsibility for the pre-dawn attack.

They claimed they destroyed seven aircraft and three military vehicles and published photos of masked gunman standing next to an aircraft in flames.

The Kenyan military said five Islamist militants were killed in the attack and four AK-47s were seized.

There was no reported Kenyan deaths.

Major Karl Wiest from AFRICOM said there are less than 150 US personnel at the base, where they provide training and counterterrorism support to East African forces.

Kenyan military spokesman Colonel Paul Njuguna said the base had since been secured.

Colonel Njuguna said in a statement: "This morning at around 5:30 am an attempt was made to breach security at Manda Air Strip. The attempted breach was successfully repulsed.

"Arising from the unsuccessful breach a fire broke out affecting some of the fuel tanks located at the airstrip. The fire has been put under control."

Today's attack comes as the Pentagon is embroiled in an escalating standoff with Iran after President Donald Trump ordered a drone strike that killed General Qasem Soleimani.

Tehran and Washington stoked fears of World War Three as they traded threats.

The Prime Minister broke his silence on the US drone strike on the second most powerful man in Iran, who he said slaughtered thousands of innocents.

He said in a statement: "Today I have spoken with President Macron, President Trump and Chancellor Merkel, and will be speaking with other leaders in the coming days.

"General Qassem Soleimani posed a threat to all our interests and was responsible for a pattern of disruptive, destabilising behaviour in the region.

FACE IN THE FIRE ‘Big devil face’ spotted over Australia fires as death toll rises to 20 REVENGE MISSION From blowing up ships to closing Dubai airport, 8 ways Iran strike back MUM'S AGONY Mum found her toddler unconscious in pool before he died eight YEARS later WIPED OUT Heartbreaking clip shows kangaroo carcasses as a BILLION animals die in fires SAVAGE ATTACK Huge mob sexually assault screaming woman during NYE celebrations in Egypt ‘THE DEVIL IS AMONG US’ Daughter, 25, and new husband shot dead by her own dad on NYE

"Given the leading role he has played in actions that have led to the deaths of thousands of innocent civilians and western personnel, we will not lament his death.

"It is clear however that all calls for retaliation or reprisals will simply lead to more violence in the region and they are in no-one's interest.

"We are in close contact with all sides to encourage de-escalation. I will be speaking to other leaders and our Iraqi friends to support peace and stability."

5 A photo from Counter Terrorism & National Security Intelligence Kenya shows the bodies of the Al-Shabab militants who were killedCredit: CTNSIS5 This image shows some of the weapons that were recoveredCredit: CTNSIS5 Travellers are seen gathered at the Lamu jetty following an attack on a military base in Manda, Lamu, KenyaCredit: Reuters