Militants attack Kenyan and US military base 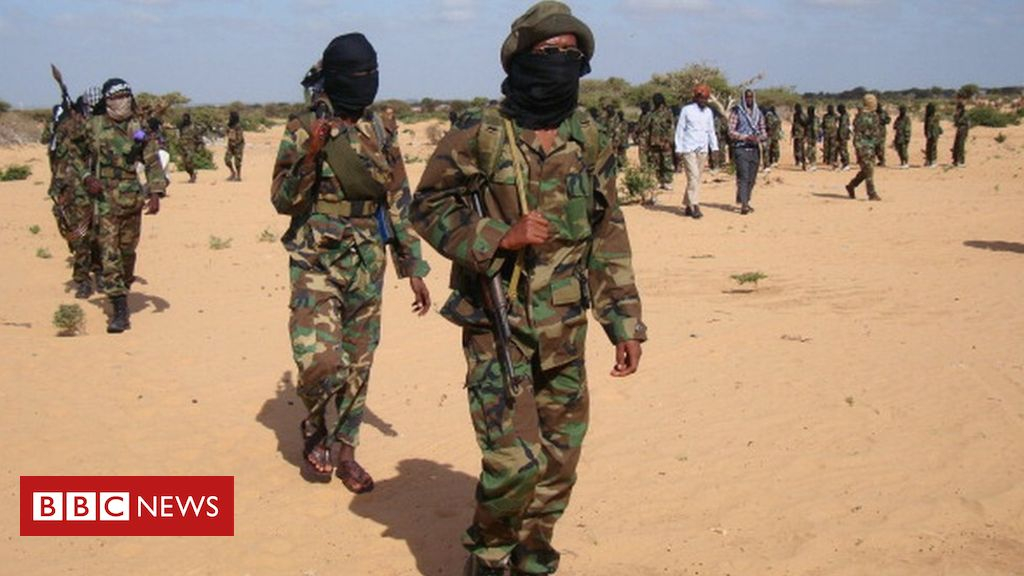 Al-Shabab has waged a brutal insurgency in East Africa

The Islamist militant group al-Shabab has attacked a military base used by Kenyan and US forces in the popular Kenyan coastal region of Lamu. Witnesses reported hearing gunfire and seeing plumes of black smoke emerge from Camp Simba on Manda Island.Kenya's military said the insurgents had been driven out of the base, but the US Africa Command said the security situation remained "fluid".Al-Shabab is linked to al-Qaeda and is headquartered in neighbouring Somalia.The group has carried out a spate of attacks in the region since it was formed more than a decade ago. On 28 December, about 80 people were killed in a bombing in Somalia's capital, Mogadishu. What happened at Camp Simba? The Kenyan Defence Forces (KDF) said "an attempt was made to breach security at Manda Air Strip" but the attack was repulsed.Four militants were killed, it added. A fire caused by the attack had been extinguished and the airstrip was now safe, a KDF spokesman said.A nearby airfield used for civilian flights had reopened, aviation officials said. Al-Shabab said it had "successfully stormed the heavily fortified military base" before taking "effective control of a part of the base".The group said the Kenyan military used warplanes to repel the attack. How extensive was the damage? The Associated Press news agency reported that two aircraft, two US helicopters and multiple vehicles were destroyed at the airstrip. Al-Shabab said there were "severe casualties on both American and Kenyan troops stationed there", and seven aircraft had been destroyed. A journalist with Voice of Africa tweeted photos of what the militants said was a US aircraft that had been targeted.In a statement, the US Africa Command said the airfield was still in the process of being "fully secured". "Initial reports reflect damage to infrastructure and equipment. An accountability of personnel assessment is under way," the statement added. The camp has fewer than 100 US personnel, AP reported. 'Audacious assault'By BBC World Service Africa editor Will RossThis was an audacious pre-dawn raid by al-Shabab militants. The message from the Kenyan military appears aimed at downplaying the severity of the attack, while the US has not yet said whether it suffered any casualties. It is not yet possible to verify al-Shabab's version of events, but there are unconfirmed reports that one of the aircraft destroyed in the attack is a US plane used for spying in the region. The fact that this happened close to the popular tourist destination of Lamu Island is also alarming. Since 2011, when Kenya sent troops to fight al-Shabab in Somalia, the jihadist group has carried out frequent attacks on Kenyan soil. Almost exactly a year ago, 21 people were killed during a raid on the Dusit hotel complex in the capital Nairobi.

Media playback is unsupported on your device

Media captionDusit hotel attack as it happened: explosions, gunfire and rescue operationIn June 2018, a US commando was killed in Somalia during an attack by al-Shabab. The US has stepped up military operations against the militants since Donald Trump became president in 2017.The US military conducted more air strikes in Somalia in 2019 than in any previous year.