Key areas that could pre-occupy Nairobi for the next 12 months. 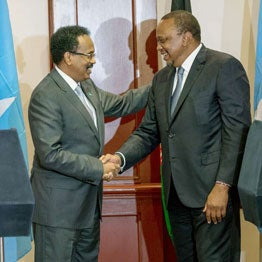 Kenya’s performance on the international stage in 2019 could be debatable, depending on who you ask.President Uhuru Kenyatta, in his New Year’s message, claimed the year saw the country’s profile “soar” through sportspeople, scientists and... “our leadership in areas of international peace and diplomacy".The President may have been referring to conferences Nairobi hosted, such as the International Conference on Population and Development (ICPD25), and victories like being re-elected to the Council of the International Maritime Organisation (IMO), as well as the African Union endorsement of Kenya’s candidature for the UN seat.This was also the year when Nairobi lost opportunities to host the nascent AU free trade secretariat (AfCTA) to Ghana and the regional offices for the Afrexim Bank to Uganda.In 2020, the bar could be higher for Kenyan diplomats. Here are the key areas that could pre-occupy Nairobi for the next 12 months.• Maritime dispute with Somalia

Somalia’s case at the International Court of Justice largely punctuated relations between the countries in 2018. Kenya accused Somalia of auctioning oil blocks in the disputed area, charges Mogadishu denied, but Nairobi went ahead to pull plugs on bilateral relations, which were only normalised in November.With the ICJ decision binding on both sides, Nairobi has been lobbying to have the issue resolved out of court, arguing the judges may not consider the political compromises attached to the dispute.How will it go? The ICJ is due to hear, and determine, the case in June but Nairobi’s lobbyists say the matter may not end there, especially since the Court lacks powers to enforce the binding decisions. Whatever happens at the court, before or after the verdict, also depends on political movements in Somalia. As Somali President Mohamed Farmaajo seeks to consolidate power, and seek re-election; his key headache has been how to secure the country, and make federal states toe his line. Ahead of elections, the maritime issue has become a nationalistic debate with anyone opposed to case branded a traitor. In the meantime, Nairobi may hope that whoever wins the election, if it is held at all, will accept to discuss an amicable solution to the boundary issue.• UN Security Council seatKenya won African Union’s endorsement to contest for the non-permanent UN Security Council seat last year, but the victory appeared more of a triumph in a battel rather a war.While AU is not a member of the UN, the continental body has traditionally been endorsing candidates, based on regional rotation, “to act in its name” at the UN. It means that an endorsement often almost guarantees you victory at the UN.For Kenya, however, its initial competitor, Djibouti, has refused to give away and has gone on to launch a parallel campaign directly to UN members. Djibouti argues AU’s procedure of endorsing Kenya was flawed and did not consider the fact that Kenya has been there twice before (Djibouti once).How will Kenya do it? A group of diplomats, led by the Diplomatic and Political Secretary Tom Amolo and Kenya’s Permanent Representative to the UN Lazarus Amayo, have been marketing the country to UN members, promising to defend multilateralism and the link with regional blocs.However, if the contest goes down to the wire, Nairobi could be forced to do another lobbying among African states for the vote as it needs at least 129 votes at the UN. A victory at the June elections could be the ultimate prize, but a loss against Djibouti could be an embarrassment everyone in Nairobi wants to avoid.