Kenya walks a tight rope on the diplomatic stage 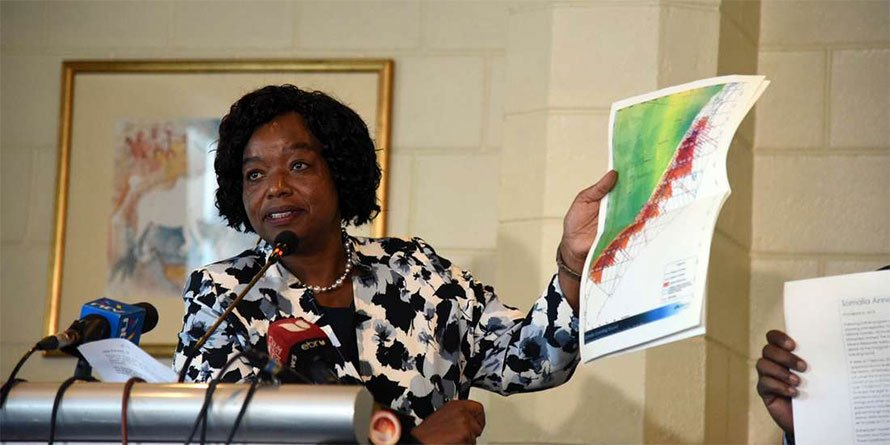 Proceedings in the maritime boundary case pitting Kenya and Somalia at the International Court of Justice (ICJ) are likely to be the highlight of 2020.The ICJ, the principal judicial organ of the United Nations, on October 18, 2019 agreed to postpone oral proceedings in the case to the week beginning June 8 this year following a request by Kenya. Initially, they had been due to take place between November 4 and 8, 2019.

The case was instituted by Somalia on August 8, 2014, asking the court to determine, on the basis of international law, the complete course of the single maritime boundary dividing all the maritime areas appertaining to Somalia and to Kenya in the Indian Ocean, including the continental shelf beyond 200 nautical miles.

Somalia wants the ICJ to redraw the Indian Ocean boundary between the two countries from the current straight line to a diagonal flow.

In its application, which was accompanied by three sketch maps, Somalia contended that both states “disagree about the location of the maritime boundary in the area where their maritime entitlements overlap”, and asserted that “diplomatic negotiations, in which their respective views have been fully exchanged, have failed to resolve this disagreement”.

The disputed area is about 100,000 square kilometres, which is said to contain hydrocarbons reserves. Reports that Somalia had auctioned off oil blocks in the disputed territory sparked a diplomatic row between the two countries.

Kenya had initially sought to have the matter resolved within the mechanisms of the African Union. It also argued that a Memorandum of Understanding (MoU) entered between the two countries in 2009 had resolved the matter but Somalia holds otherwise.

The October 18 postponement, which Kenya sought on the basis it will give it time to reconstitute its legal team, according to the ICJ, is the final one.

Initially, the case was to be heard between September 9 and 13, 2019 but Kenya sought an extension before appealing again, arguing it needed at least until September next year to be adequately prepared.

Another issue that is likely to be on the radar of diplomatic watchers is Kenya's bid to secure a non-permanent seat on the United Nations Security Council, especially in light of stiff opposition from Djibouti.

Kenya, which in early December extended its hunt for votes to South East Asia, is likely to continue intensifying the campaign in the coming months ahead of the June 2020 election.During the poll, which will be held during the 74th session of the United Nations General Assembly, held at UN headquarters in New York, Kenya will be bidding to become one of the five non-permanent members who will serve two-year mandates commencing on January 1, 2021, replacing South Africa.

However, Djibouti, which holds it deserves to be the African candidate on the basis of regional rotation, has refused to bow out despite Kenya holding a written AU endorsement. The race will likely go down to the wire.

Boundary disputes between Kenya and some of her neighbours will also remain a centre of focus for the country's diplomats in 2020.

An MoU between Kenya and Uganda that provides for the joint administration of the Migingo Island is set to face scrutiny from Kenyan legislators who see it as ceding the country's territorial integrity.

Foreign Affairs Cabinet Secretary Monica Juma in November said the pact would see modalities laid to enable fishermen and other Lake Victoria users to access either side of the boundary.“My message to Kenyans is that we have their interests at the top of our minds and this can be realised by reducing the risks they face in accessing the trans-boundary resources,” she was quoted as saying.

She is expected to provide more details of the deal and address fears that Kenya may have bent over backwards to accommodate Uganda, which has been manning the fish-rich Island waters for several years now.

Focus will also be on finding a lasting solution to incessant cross-border conflict between communities in Kenya, South Sudan and Ethiopia over resources in the disputed Elemi Triangle.

In July 2019, President Uhuru Kenyatta and his South Sudan counterpart, Salva Kiir, agreed to form a joint commission to address the dispute over the oil-rich area.

The decision was reached during a meeting at State House, Nairobi, following clashes pitting the Toposa of South Sudan, the Turkana of Kenya and the Nyang’atom of Ethiopia.

Mr Kenyatta revealed that his ministerial team had concluded an MoU on delimitation and demarcation of common borders.The status of East African Community (EAC) integration will also be on focus especially following the postponement of the 21st Ordinary Meeting of the Heads of State Summit initially scheduled for November 30. The Summit is now tentatively slated for either this January or February.

According to EAC Secretary General Liberat Mfumukeko, the 21st Summit was postponed after a request by one of the members.

Though EAC maintains that the move had nothing to do with a dispute or disagreement among any of the EAC states, diplomatic watchers fear tensions between some of the member states, lately Uganda and Rwanda, could jeopardise integration efforts.

The threat of renewed conflict renewed conflict in South Sudan will be on Kenya’s radar in 2020 as well. An agreement between President Kiir and the first vice-president, Riek Machar, has yet to translate into peace in the country.