I Was In Sri Lanka For The Boxing Day Tsunami. To Me, Disaster Is Always Around The Corner

A stench that I had never experienced before was everywhere. 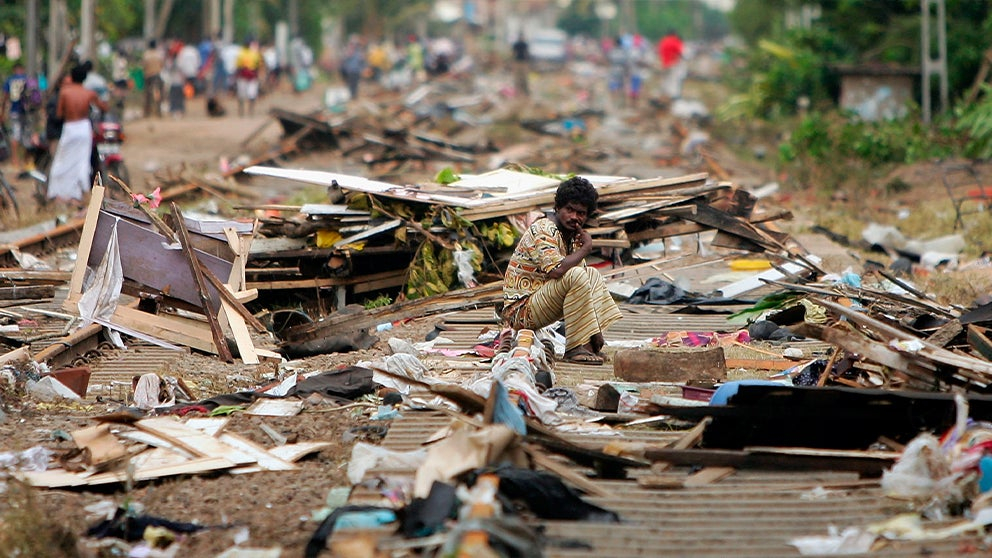 A stench that I had never experienced before was everywhere.

The sickening, rotting smell had settled on my clothes and even my skin. So strong is the smell of death.The worst scene I saw in Sri Lanka was a train that had been swept away by the tsunami, killing more than a thousand passengers. Their bodies were scattered everywhere, like lifeless dolls.The disaster hadn’t spared anybody. Overnight the wealthiest and the poorest alike had become displaced, searching for food, water, clothes and shelter. People waited by the roadside for any relief they could grab from those incoming vehicles.

Sarah: No Matter How Hard 'Survivor' Was, It Wasn't Going To Be As Hard As Surviving A Tsunami

Having lived through the 2004 Boxing Day tsunami in Sri Lanka, Sarah said that essentially, nothing 'Australian Survivor' threw at her was going to be that difficult.

Australians will never forget the images and stories of the Boxing Day tsunami -- whether it was AFL footballer Troy Broadbridge's courageous last words to his wife of only eight days in his final moments on their honeymoon in Thailand, or idyllic seaside resorts washed away by the monster wave. Entire villages disappeared in minutes. Families never recovered the bodies of their loved ones who were swept out to sea. Our hearts broke for them. We grieved with them as stories of suffering, survival and heroism filled our lives for weeks.A fishing boat marooned on a road after the Indian Ocean tsunami struck Galle, Sri Lanka. 27 December 2004. (Image: Getty)Today marks 15 years since Asia’s devastating earthquake and tsunami, which killed more than 230,000 people as it ripped through 14 countries. Twenty six Australians died in Thailand and Sri Lanka. For people like myself who were on the ground when one of the world’s deadliest natural disasters hit, it’s a deeply personal and emotional time.My colleagues and I are no strangers to suffering, having worked in disaster and conflict zones around the world, and yet even we had never seen anything like this before. I hope there won’t be anything that matches it in my lifetime.Sadly, since that day, we’ve seen tsunamis strike Japan, Solomon Islands, and most recently, Indonesia twice last year. The Asia Pacific remains the world’s most natural disaster prone region and it’s right on Australia’s doorstep. Catastrophic events such as earthquakes, cyclones, floods and tsunamis aren’t preventable, but such high losses of human life -- like what we saw 15 years ago -- can be.

The Devastating Aftermath Of The Indonesian Tsunami In Pictures

Australia has offered Indonesia whatever help it requires, after an earthquake and consequent tsunami tore through the Island of Sulawesi.

The push for disaster preparedness and early warning systems has since saved countless lives in at-risk communities. Annual global deaths from natural disasters since 2012 have hit some of the lowest figures in decades even though the population is rising.Across the globe, humanitarian agencies are working around the clock to incorporate disaster risk and mitigation efforts into their programmes. From the Solomon Islands to Somalia, farmers are learning how to cope with the risk of severe flooding or drought.As the Horn of Africa faces severe drought, a Somali woman waters her goats in Carro-Yaambo, a village 20 miles west of the capital Hargeisa, Somalia. 21 June 2017. (Image: Getty)Schools in Sulawesi, where last year’s earthquake and tsunami killed over 2,000 people, are teaching children how to survive liquefaction and wave surges. For them -- living on a knife’s edge -- disaster-preparedness is now as important as learning to read and write.In other at-risk zones, children are taught how to map out escape routes and conduct simulation drills. Childhoods are marked by the dread of hearing deafening warning alarms.All of this has helped mitigate disasters. But the reality is unless urgent action is taken on climate change, we are fighting a losing battle.Climate and weather patterns are changing, becoming more unpredictable, severe and ‘un-natural’. The World Bank estimates that disasters forced 26 million people into poverty every year.

Hurricanes and fires, fuelled by climate change, caused billions in damage this year, according to a new report.

Natural and environmental crises bring with them disruption, devastation and displacement. Population growth and climate change are fuelling the threat to vulnerable populations, and many countries are simply not ready.A damning report from the Intergovernmental Panel on Climate Change warns that the situation will inevitably worsen because of climate change. Global leaders have grappled with the crisis but failed to make real strides. Meanwhile, children in some of the world’s poorest communities are already living in fear of its deadly consequences.Across the world, in many cases, the impact of quakes, tsunamis, typhoons, floods and droughts are slowing economic growth, undermining development and trapping millions of people in poverty. Just this year, Mozambique suffered two of its most severe cyclones on record within weeks of each other, while devastating floods have torn through Asia.A road partially destroyed by floods after Cyclone Kenneth hi Pemba, Mozambique. 28 April 2019. (Image: Getty)In Southern Africa, recurrent drought has left more than 11 million people in urgent need of humanitarian assistance. Somalia is facing ever-increasing drought cycles that are worsening poverty and energising conflict.In Fiji, several villages were forced to relocate due to sea level rise. Indonesia is looking to move its capital city from Jakarta due to the threat of flooding. At home in Australia, bushland and forests are burning on a frightening scale.Every year as friends and family celebrate Christmas, my colleagues and I nervously monitor for where the next disaster will strike. The unfortunate fact is that it’s always disaster season somewhere.Many people consider the 2004 tsunami a ‘once in a lifetime disaster’ but it’s possible that another disaster on that scale could strike again. I shudder at the thought.The world is waking up to the effects of climate change on natural disasters, but time for action is running out.