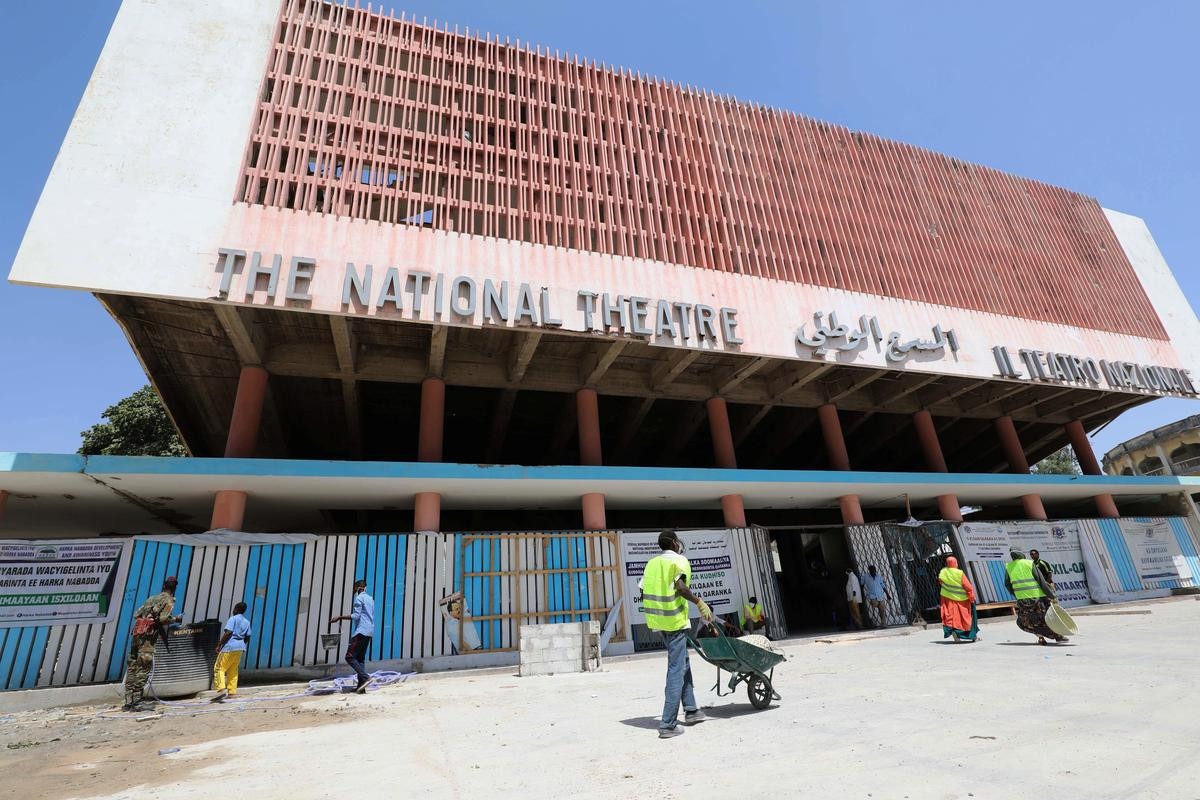 Recently Mogadishu suffered yet another horrific terrorist attack, the deadliest in two years, killing nearly 80 people and wounding more than 100 people. Much of the discourse about wars such as this merely chronicles numbers: lives lost, dollars of damage done, years to rebuild. The focus of post-conflict transition, then, becomes remains on the recovery of formal institutions, the type of the regime, the growth of the economy, and the strength of the electoral processes. However, we seldom make room for the equally important process of cultural rebuilding that gradually takes place, in particular the efforts to rescue democratic spaces that facilitate everyday peace. For Somalis, the arts, especially theatre has remained a crucial site for the social and political reimagination of the nation.

Modern Somali theatre rose to prominence in the 1960s, the period following the independence and the subsequent unification of Somaliland and Somalia. By the 1970s, there were multiple shows a night in any given city and the average Somali adult was considered a regular theatre goer regardless of socioeconomic status.

Several elements make the Somali theatre tradition unique, most distinctly its inextricable tie to poetry. Large parts of the play, usually the ones that carry the emotional weight of the play are conducted in verse. The ease with which poetry and prose coexist on stage reflects the unparalleled space that poetry occupies in Somali culture. For Somalis, poetry signifies immense national and linguistic pride. Poetry consistently outsells fiction and public readings routinely draw massive crowds. In fact, the successful playwrights of the twentieth century were poets themselves, echoing the fluidity that exists between the genres.

And since the rise of Somali theatre coincided with the golden age of Somali music, a live band accompanies most theatrical performances. This combination has allowed for the sustained musical component in Somali plays, where characters intermittently perform songs to convey difficult emotions or profess their love. During the song, audience members are allowed to go on stage to deliver flowers or dance with the actors. As the song concludes, the fourth wall resumes.

It is on stage that most urgent of social issues are deliberated and tacit taboos tackled. Successful plays, such as Hablayahow Hadmaad Guursan Doontaan (Ladies When Will You Marr?) and Beenay Wa Run (The Lie is the Truth) take up questions about feminism, Somalia’s increasing integration into global geopolitics, religion, and the changing conventions of love and marriage. During the 1960s and 1970s, northern artists performed alongside southern ones with only accents marking them apart. In a society, where regional and clan divisions govern almost all aspects of social life, the stage was a significant exception. Gender roles were rigorously contested, expectations revisited. Female artists formerly considered social outcasts and an affront to familial and communal honor became widely revered. And to this day, the stage remains the only acceptable and safe place for a man to cross-dress.

The popularity of theatre and the social latitude allowed to artists to comment and contest the status quo have earned poets and playwrights an irrevocable place in the historical trajectory of the region. It is widely believed that the 1968 play Gaaraabidhaan (Glow Worm) by famed playwright Hasan Shiekh Muumin inspired Siyad Barre’s military coup in 1969. And it was the poets and the playwrights of the 1980 who proved instrumental in the resistance against Barre’s oppressive regime. For many Somalis, Landcruiser, a play by Cabdi Muxumed Amiin staged at the National Theatre of Somalia in 1989, incited the uprising that eventually led to Barre’s fall.

Theatre and poetry continued to play a crucial role in the post-rapture period, serving as a tool to initiate peace talks and promote social healing. After the collapse of the central government and the start of the civil war in Somalia, a collective of Somali poets, singers, and playwrights from across the region staged a play in Mogadishu, titled Qoriga Dhig, Qaranka Dhis (Put Down the Gun, Build the Nation). In the early 2000s, Mohamed Ibrahim Warsame Hadraawi, hailed as the greatest living Somali poet, embarked on Socdaalka Nabada (Peace Journey). Walking the entire length of Somalia, including a visit to the prison in which he spent five years for his poetry, Hadraawi performed for a renewed commitment to peacebuilding. A citizen of Somaliland, Hadraawi expressed his resistance to the severing of cultural ties along nationalist borders. IREX Europe, a non-profit that supports democracy and human rights initiatives, led a UN-funded theatre and poetry caravan across Somaliland in 2010 to facilitate post-conflict dialogue.

As the civil war continued to ravage Somalia and Somaliland began the gradual process of recovery, formal support for the arts largely disappeared. Yet, there endured sustained grassroot efforts to preserve the artistic heritage of Somalis and cultivate sites for the engagement in cultural production. After Al-Shabab captured large parts of Somalia in the mid 2000s and banned music and other forms of entertainment, people organized underground concerts and shared music in clandestine memory cards risking imprisonment or worse execution. In Somaliland, the Hargeisa Cultural Center is home to over 14,000 cassette recordings of plays and music that were collected, preserved, and donated by individuals who saved them as they fled the war that reportedly destroyed over 90 percent of their city.

In 2012, the Somali National Theatre in Mogadishu re-opened its doors for the first time in 20 years after ordinary citizens and local businesses partnered with the first transitional federal government to raise the funds required to restore the theatre. Its first play, a comedy, garnered an audience of around a thousand people. Two weeks later a suicide bomber attacked the theatre, killing 10 people and wounding many more. The restoration of the Hargeisa National Theatre began a few years ago when the government sold it to a private developer. To calm the public apprehension about the privatization of the prominent cultural landmark, the developers promised to place the restored 3500-seat theatre at the heart of their new seven-story commercial center.

The collective ownership of high art not by an elite few but by the unremarked many is arguably Somalis’ most cherished and best sustained experiment in democracy. A heightened communal experience, Somali theatre, at its core, demands a tenacious faith in a public. This past year, the Somali National Theatre has once again attempted a reconstruction; large crowds once again gathered for light-hearted, politically poignant entertainment in defiance of the terror to which they and their city are frequently subjected. The persistence of theatre and poetry to govern the daily discourse of a wounded people, to permeate in each one of their recovering buildings and fractured lands indicates not only the resilience of the Somali people but the unflagging democratic spirit that resides within them.