How Flooding Is Devastating the Central African Republic

A photographer documents the worst flooding in two decades 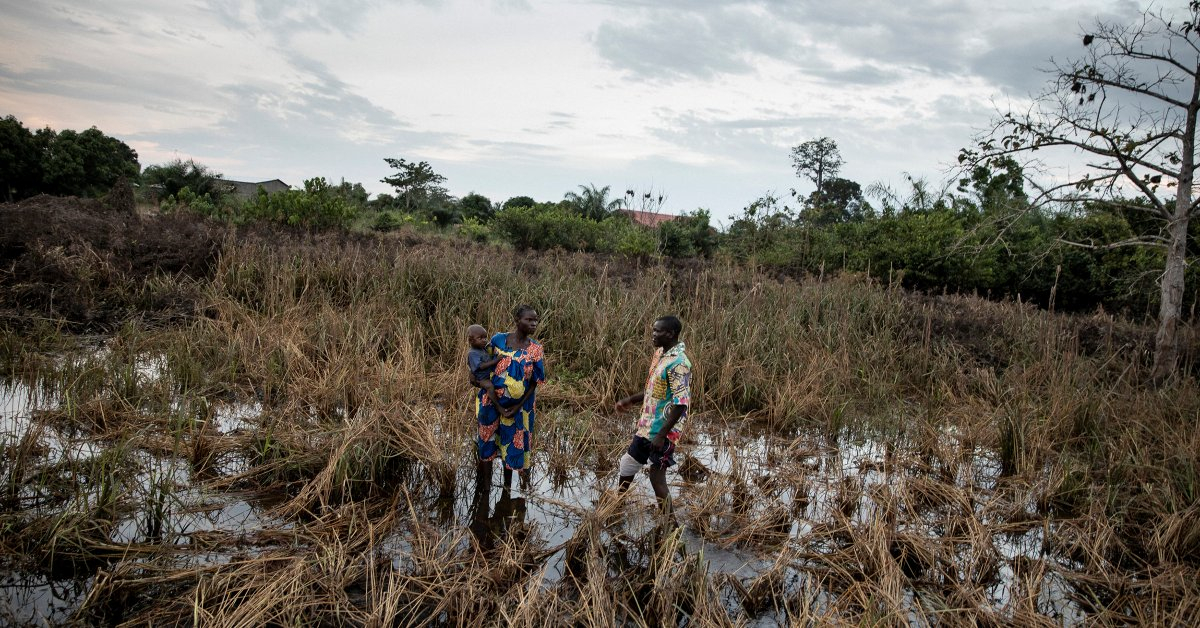 Since October, the Central African Republic (CAR) has been hit by the worst flooding in two decades, destroying over 10,000 homes and affecting an estimated 100,000 people across the country. Dozens of people have been killed and several hundreds of thousands more affected across the east and central African region.

Exceptionally heavy torrential rains have caused the Oubangui river, a major tributary of the River Congo that forms the border between CAR and the Democratic Republic of Congo, to overflow on about 372 miles of shoreline, according to UNICEF. Several riverside communities in CAR have been adversely affected, with reports from aid organizations that the flooding is so bad in the capital Bangui that the only way to get around is by canoe.

Water marks showing the flooding are seen in Georgine Kouangassam's neighbor's house on Nov.26, 2019. When the water rose in Kouangassam's house at night, everyone struggled to get out in the dark. Her granddaughter Angela, 3, drowned.

A house is seen at night in a flooded neighbourhood of Bangui, capital of the Central African Republic, on Nov. 22, 2019 during a night patrol.

Adrienne Surprenant is a Canadian photojournalist who has worked for several years in the Central African Republic, focusing on long-term projects with social and environmental themes. In recent weeks, Surprenant has documented the effects of the flooding in Bangui and the surrounding areas, in partnership with environmental organization Greenpeace. “This year, the climate change was stronger than before. We don’t even know what we can do anymore,” said 38-year-old plant cultivator Bruno Yamkomopanza. He lost his five hectares of sowing seeds, where he planted carrots, coleslaw and cucumbers, to the floods in Bimbo, near Bangui.

“While heavy rains are not unusual during the rainy season, their intensity was unprecedented,” says Safiatu Alabi, head of programmes in CAR for the Norwegian Refugee Council. “When asked, men and women in Bangui and Bimbo recalled flooding occuring in the past 10 to 15 years, but never to the extent experienced this season.” In late October, Prime Minister Firmin Ngrébada declared a national catastrophe in the country; two months on, the situation on the ground is still critical.

Nina Yaeke, a 30-year-old mother of 8, used to live on Monkey Island, midway between the Central African Republic and the Democratic Republic of Congo. She completely lost her home to flooding, and hopes to live in Bangui in the future.

CAR is one of the poorest countries in the world and the most food-insecure country in the world, and the recent flooding has exacerbated several underlying humanitarian problems. According to the Norwegian Refugee Council, 1 million people are currently displaced and 2.6 million are in need of urgent assistance due to ongoing conflicts in several parts of the country, which has been embroiled in a violent civil war between the government, rebels and militia groups since 2012. “These men, women, boys and girls simply do not have a safety net to fall back onto when faced with additional shocks and stresses, as has happened when these massive floods hit,” says Alabi.

As the sun goes down, Guy Zegue distributes manioc in front of his shelter at the Socada camp on Nov. 23, 2019. The former member of the Central African army fled with his wife and children as all of Monkey Island was flooded.

Bruno Yamkomopanza, a farmer in Bimbo near Bangui, lost his five hectares of sowing seeds to the floods, seen here on Nov. 24, 2019.

Several other countries across central and east Africa have also been affected by the flooding, including Somalia, Ethiopia, South Sudan, Somalia, Cameroon and Nigeria. While the region is susceptible to flooding during the second rainy season in October to December, a weather phenomenon known as a positive Indian Ocean Dipole has been linked to more extreme rainfall to east Africa. According to the Australian Bureau of Meteorology, the dipole’s positive phase this year has been the strongest for six decades, resulting in warmer sea temperatures in the western Indian Ocean region. It’s uncertain whether the weather pattern, known as the Indian Niño, has directly caused the flooding, but it is thought to lead to enhanced rainfall across East Africa and droughts across Australia.

Get The Brief. Sign up to receive the top stories you need to know right now.

For your security, we've sent a confirmation email to the address you entered. Click the link to confirm your subscription and begin receiving our newsletters. If you don't get the confirmation within 10 minutes, please check your spam folder.

“What we’re seeing in Australia with the droughts and the fires at the moment is apocalyptic,” says Paul Johnston, head of the Greenpeace Science Unit. “East Africa has been seen less in the news, but it has affected a lot more people and potentially precipitated a serious food insecurity problem in the coming year. Those dimensions are pretty underrepresented.” According to predictions, the phenomenon will only become more extreme in the years to come. “There is evidence to suggest that under progressive climate change, we are getting more extreme dipoles and there’s also evidence to suggest that they are likely to increase in frequency, from once in about sixteen to seventeen years to once in six to seven years,” Johnston says.

Désiré Ndoumba, a 50-year-old father of 8, hosted around 50 of his neighbors in Bangui when the floods invaded their homes, seen here on Nov. 22, 2019.

In these quiet, intimate portraits, Surprenant captured the effects of the floods on local people, some of whom lost everything to the water and were forced to escape to safety during the night. Désiré Ndoumba hosted around 50 of his neighbors in his house to escape the rising floods. “I can’t just stare at the people staying homeless. That’s why I opened my doors to them, so that they can sleep well, and that everyone has at least a small space,” he told Surprenant.

“Living in the CAR, I find myself discouraged by this event once again hitting the population,” Surprenant writes on Instagram. “Some of them were displaced by the conflict, starting to rebuild, and find themselves with nothing once again.”

On Monkey Island, located in the middle of Ubangi River between the Democratic Republic of the Congo and the Central African Republic, almost all the houses fell to the floods, since they were made of mud-bricks. People fled during the night to the riverside.

And some aid workers say the worst may be yet to come — the damage to agricultural fields means an entire crop season will be lost, destroyed infrastructure will take a long time to rebuild and contaminated water sources could put families at risk of fast-spreading diseases such as cholera. “While the water is slowly retreating, this is bringing a whole range of health-related questions with it,” says Alabi.

She says that 2020 “will be the real test” in terms of response from the international community. In 2019, CAR received its lowest amount of relief and aid funding in six years, potentially because of the increased number of other crises in the region. The U.N. and humanitarian partners had appealed for $430 million for CAR this year, and so far only 67% has been funded. “People in the CAR are longing for peace and security. These are basic rights that many Central Africans have been deprived of for too many years.”

Write to Suyin Haynes at suyin.haynes@time.com.