English Situation Report on World and 18 other countries about Agriculture and Insect Infestation; published on 06 Jan 2020 by FAO 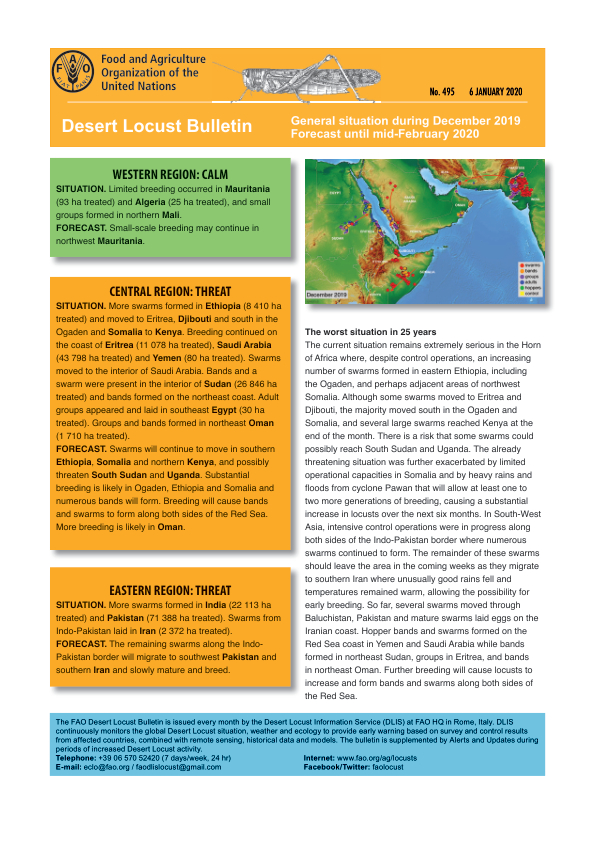 The worst situation in 25 years

The current situation remains extremely serious in the Horn of Africa where, despite control operations, an increasing number of swarms formed in eastern Ethiopia, including the Ogaden, and perhaps adjacent areas of northwest Somalia. Although some swarms moved to Eritrea and Djibouti, the majority moved south in the Ogaden and Somalia, and several large swarms reached Kenya at the end of the month. There is a risk that some swarms could possibly reach South Sudan and Uganda. The already threatening situation was further exacerbated by limited operational capacities in Somalia and by heavy rains and floods from cyclone Pawan that will allow at least one to two more generations of breeding, causing a substantial increase in locusts over the next six months. In South-West Asia, intensive control operations were in progress along both sides of the Indo-Pakistan border where numerous swarms continued to form. The remainder of these swarms should leave the area in the coming weeks as they migrate to southern Iran where unusually good rains fell and temperatures remained warm, allowing the possibility for early breeding. So far, several swarms moved through Baluchistan, Pakistan and mature swarms laid eggs on the Iranian coast. Hopper bands and swarms formed on the Red Sea coast in Yemen and Saudi Arabia while bands formed in northeast Sudan, groups in Eritrea, and bands in northeast Oman. Further breeding will cause locusts to increase and form bands and swarms along both sides of the Red Sea.