Decades of searching over, filmmakers work to reintroduce Somali-made epic to the world

Said Salah Ahmed recalls his journey from Minnesota to reclaim his lost film and a piece of Somalia’s cinematic history. 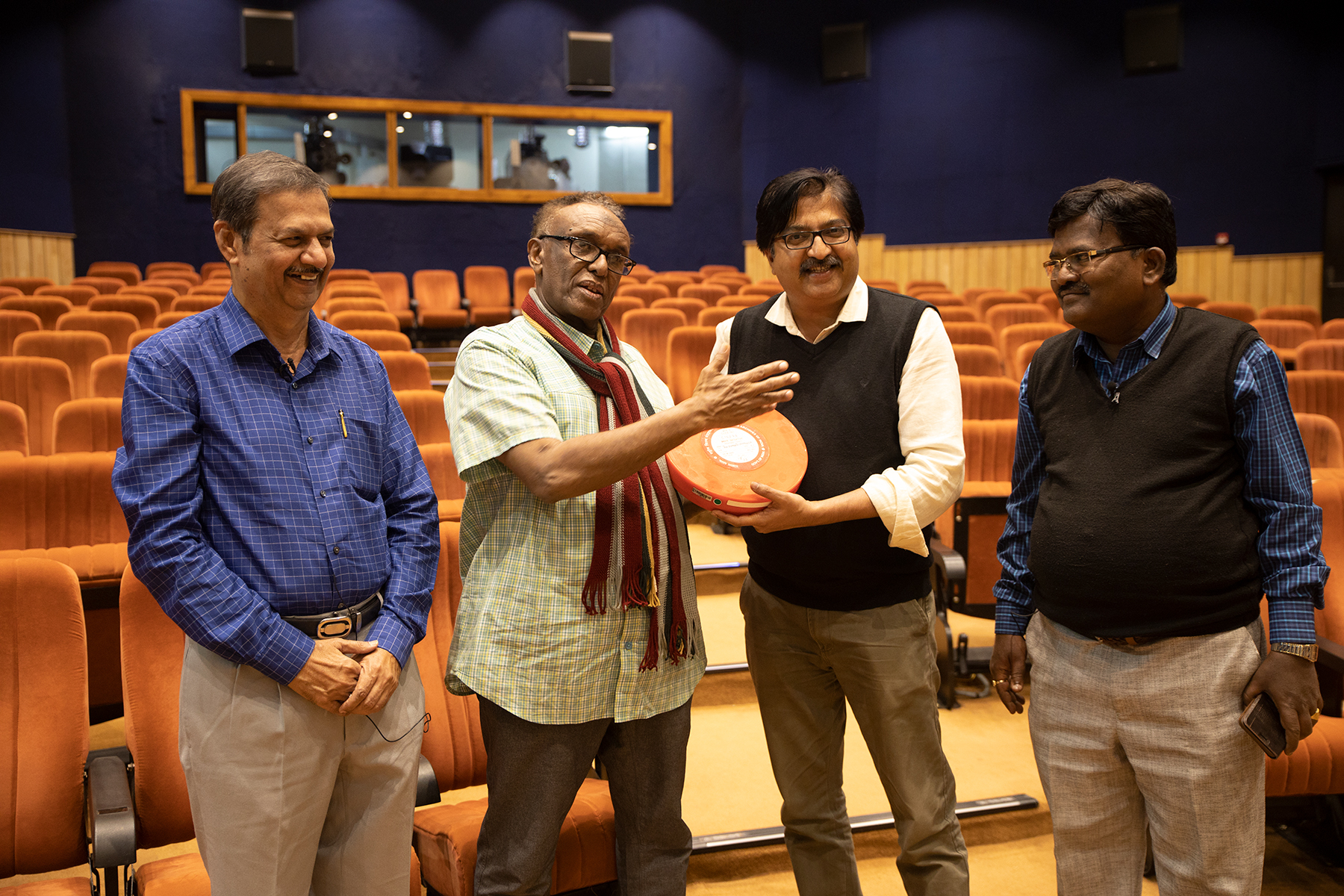 Said Salah Ahmed had been on a search for what could be the last Somali-made film from the pre-war era — his own.

For more than three decades, the 74-year-old University of Minnesota professor had been seeking the footage of his film The Somali Dervishes, a film about Mohamed Abdullah Hassan and his anti-colonial campaigns in the early 1900s. The four-hour-long film was shot and shown throughout Somalia before the nation’s disastrous civil war destroyed nearly all of its cinematic history.

The search ended last winter at the National Film Archive of India. With a big assist from documentary filmmaker Mark Brecke, Ahmed was reunited with the footage. The two are now trying to resolve contract disputes and raise enough money to re-release the film digitally, in the process resetting the course of Somali cinematic history.

On December 26, Ahmed and Brecke found themselves standing at the NFAI staring at reels of a film so personal that Ahmed likened it to a lost child. “That was the day of change,” Ahmed remembered.

The building where the film was edited decades ago had been demolished, but “they packed the archives and said that they had an unclaimed film with Somali on it. It sat at the archives for another 15 years.” Brecke saw how much the moment meant to Ahmed, but also understood the historical and cultural importance of the film for Somalis around the world. “Of course, I was happy for Said to find his film, but I’m extremely happy for Somalia. It is their film,” Brecke said. “That war had taken everything, not just from Said, but from Somalia.”

Brecke’s filmmaking has centered on conflict and tragedy. He traveled to the Balkans, Rwanda and Darfur to document the violence there. When he moved to Nairobi in 2012, Brecke decided to focus on Somalia. He had seen enough films depicting Somalia in a negative light, and wanted to explore the nation’s cinematic history.

“What I want to do is create the counter narrative, especially in the West. Not the war, not the failed state or the pirates,” Brecke said.

Brecke found clues to a once-rich cinematic culture in Somalia. “The Italians made feature films with Somali actors in leading roles in the 1930s,” Brecke said.

Brecke set out for Minnesota to meet Ahmed and find ways to reclaim Somalia’s lost film.

Known as a poet, playwright and author of several books, Ahmed is a globally renowned educator for nearly a half a century. While in Somalia, Ahmed served in administrative roles in education as a principal and soon as a director at the department of education. He spent 27 years teaching in Somalia before moving to the U.S. in 1996.

For the past 24 years, Ahmed has lived in the United States, working primarily as an educator. He began his work in Minnesota by proctoring exams. He then made his way back into the classroom where he taught at Sanford Middle School. While at Sanford, Ahmed began teaching at the University of Minnesota, where he has taught Somali for the past 11 years.

The extraordinary effort to find the film can only be compared to the journey that went into creating Dervishes. Ahmed pooled together resources from around the world to bring his vision to life.

Before writing his first screenplay, Ahmed had written and produced several plays in Somalia. “That’s how I came to the world of film,” Ahmed said. When asked why his first film was such a success in Somalia, he credits the story of the dervishes. Through folktales, poetry and song the story of the dervishes has been embedded in Somali culture for generations. The story of Mohamed Abdullah Hassan or “Mad Mullah” as the British called him, has helped shape Somalia’s political landscape and national identity.

Ahmed traveled to the U.S. in 1982 to meet with filmmaker David Koff and his colleagues at UCLA. The professors gave their historical perspective for the film as Koff and Ahmed discussed ways of making this film. After spending 10 months together in Maryland developing the script, Ahmed and his partners went their separate ways due to differences in their directing style.

In pre-production for the film, Ahmed studied films like Lion of the Desert (1981) and Gandhi (1982) which depicted the colonial resistance movements in Libya and India during the 20th century. But those films had budgets well over $10 million, Ahmed turned to the government, and eventually received a grant for $1.8 million from then-president Siad Barre. Adjusted for inflation, that would be nearly $5 million today.  Having fallen out with the Western filmmakers, Ahmed turned East to work with an Indian director and production crew.

The film made use of European and Asian visitors and workers who were in Somalia in the mid-1980s. Ahmed found Americans working in the ports to play characters in the film. He recruited the first secretary of the Italian Embassy in Somalia, who acted on the side and played a role in the film. More foreign cast members were recruited from the Mareerey Sugar Factory in the country’s interior.

Once the film was completed the footage was taken to India to be edited, starting a chain of custody that led to the original negative reels being lost. Ahmed traveled back to Somalia once with a set of positive reels meant for projecting the images. The contract with the production company had allowed him to keep one copy.

“It was shown from Kismayo to Jowhar. We took it to the Emirates and played it in Abu Dhabi for two nights,” Ahmed said. As the civil war broke out across the country, the handling of the film reels became uncertain. Once they were lost in the dust up of the war, Ahmed sought to get another copy.

It was 1988 when the search for the footage began. Ahmed traveled back to India that year to demand a quality copy from his production partners. However, the contract called for one positive copy of the reels to be produced for viewing. Due to bureaucracy and costly fees, Ahmed was unable to regain access to the negative reels.

For years Ahmed struggled to track down the negative reels. In Canada, he bumped into representatives of the Somali government and asked them to relay a message through the Somali Embassy in India that he was searching for his film.

Shortly afterwards Ahmed was connected to the former owner of the Bombay Film Lab, which had edited his film. He traveled to India last August only to hear that the building had been destroyed and that the reels had been moved. “It was one thing after another,” Ahmed said. The situation seemed hopeless.

It was after this that Ahmed received a call from Brecke, who was researching his documentary on Somali cinema. The two had established a relationship in 2015 centered around Somali cinema and the search for Dervishes. Their relationship came to a culmination in 2019 when the two planned a winter trip to India. They had compiled their clues and began to assemble a team. They left the U.S. on Christmas and stood inside the national archives the next day in India.

With the negative film reels now located, Ahmed and Brecke are nearing the final phase of restoring a piece of Somalia’s cinematic history by making Dervishes available to the world. The cost to turn the negative reels positive and to then convert the film to a digital product is costly. Some estimates reach up to hundreds of thousands of dollars.

Brecke is working with UNESCO and foundations to help process the film and produce a positive reel to make digital copies in high digital resolution. He also plans to work with film preserving initiatives like the Film Foundation, an organization headed up by Martin Scorsese which has preserved and restored dozens of films from the previous century.

Although Ahmed has been reunited with the footage, that’s not enough. He has pivoted to providing a way to share his vision by once again showcasing his film to the world.