Last week, a suspected member of the terrorist group surrendered to security agencies in Mandera 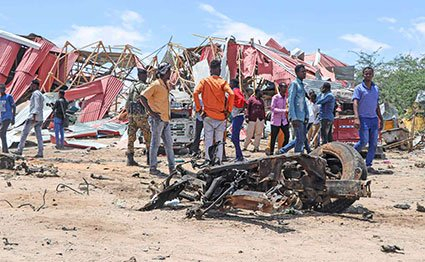 Cracks in Al-Shabaab have widened following the expulsion of two senior commanders.

Intelligence reports indicate that the militant group’s commanders have disagreed along clan lines and sharing of resources.

The differences have reportedly led to the dismissal of two top commanders identified as Bashir Qorqab and Karate by their ailing senior, Ahmed Diriye.“

The bitter differences among the three leaders arose over the sharing of resources from a big telco that has been financing Al-Shabaab,” states an intelligence report seen by the Nation.

The move has sparked a rebellion from a section of the militants over what they termed “unfair treatment of some clans”.

The faction has expressed dissatisfaction with its leadership and has protested against over-taxation and unfair treatment of its clan.

Some of the major clans in war-torn Somalia are Hawiye, Muruwade and Ogaden.

Sources indicate that another senior Al-Shabaab commander has formed a rival group to fight his former comrades over oppression of his Talha clan through taxation.

Last year, another commander, Zubair al-Muhajir, bolted out of the Al-Qaeda affiliate and condemned the group “for going against Islam and the Quran”. The terror group is also fighting a clan militia — Malawei — along the Kenya-Somalia border.

Recently, Malawei clashed with Shabaab militants, who had forcefully taken their animals and forced them to give out alms.“The conflicts have crippled Al-Shabaab operations in the area as communities turn hostile,” says the intelligence report.Identified as Salat Hajir Jimale, 23, he was reportedly armed with an AK-47 and three loaded magazines.

Recently, the group launched deadly attacks in parts of North Eastern and Mogadishu. The latest report by Armed Conflict, Location and Event Data indicates that Al-Shabaab has killed over 4,000 civilians in the last decade, with a majority being Muslims in Somalia.