The KDIC initially sued to recover Sh14 billion, but has now reduced the figure to Sh7.8 billion. 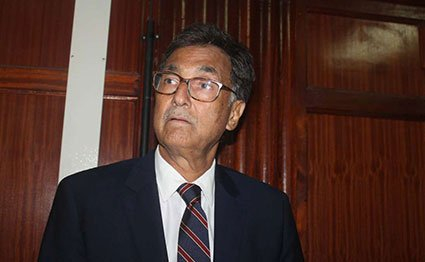 The timing of Mr Haider’s appointment raised eyebrows, as it came just two months after the Central Bank of Kenya had placed Chase Bank under statutory management following a fraud scheme that risked swallowing billions in depositors’ funds.The Iman Group was the platform Mr Khan and Mr Cheema planned to use to open a new bank in Mogadishu, Somalia.As of April 7, 2016, when CBK placed Chase Bank under the Kenya Deposit Insurance Corporation (KDIC), Mr Khan had already taken Sh48.3 million to pay for licences and other fees to set up the Iman Bank of Somalia.

A forensic audit by Deloitte filed in court shows that the money was taken from Chase Bank’s general ledger — which holds depositors’ savings — in instalments of Sh25.7 million and Sh22.6 million in October and December, 2013 respectively.

The firms were registered in the names of Mr Khan and his associates, but invested using Chase Bank funds without remitting any money to the lender, despite reaping millions.“Mr Khan was to have a stake in the bank (in Somalia) through an entity styled Rinascimento Global Limited, registered in Mauritius, in which he is the majority shareholder.

It suffices to say Chase Bank would have no stake in Iman Bank of Somalia, despite being the source of the funds towards the same,” Chase Bank’s receiver managers say in court papers.The KDIC accuses Mr Khan of living a flashy lifestyle and acquiring prime property using illicit proceeds from the collapsed lender.

Investigations found that Chase Bank co-founder Laurent Demey blew the lid on the lender via an e-mail to Mr Khan and Mr Kabui, copied to Mr Richard Carter, a non-executive director, on February 22 last year.

When confronted with the whistleblower’s information, Mr Khan denied the allegations, but the truth came out soon enough, and the CBK shut down the lender.Mauritian SBM Bank took over several lucrative Chase Bank assets in August 2018, including depositors.

But depositors will get only up to 75 per cent of their savings in three equal annual instalments.In May 2013, Iman Bank of Somalia gave $60,000 (Sh6 million) to the organisers of the Somalia Investment Summit, an annual event that brings together Somalia’s private and public business stakeholders.

Mr Khan presented the cheque to the event’s regional promotion manager, Mr John Mwangi, in Nairobi. One of the banners behind the two at the presentation had “Iman Bank of Somalia” blazoned on it, in the same font as the famous Chase Bank branding.

The Somalia project officially started on November 24, 2012 when Ms Hussein sent an e-mail to lawyer Aly Shah, a partner at Anjarwalla & Khanna, informing him of the plans to set up the bank. She indicated that $275,000 for capital would be sent to Anjarwalla & Khanna by Rinascimento Global Limited. The money was eventually sourced from Chase Bank’s general ledger in a transaction that was hidden from its board of directors.