The Department for International Development insists it has 'zero tolerance' to corruption and adopts extensive measures to prevent taxpayers' money falling into the wrong hands. 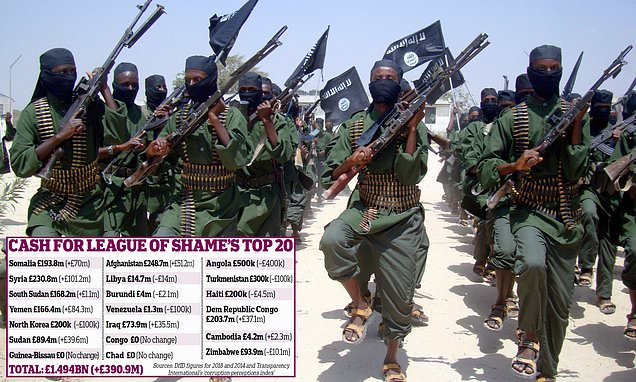 British aid to the world's 20 most corrupt countries rises by more than a THIRD in five years to £1.5BILLIONPayments to 20 states totalled £1.5billion in 2018, up from £1.1billion in 2014£400million increase comes despite warnings money is wasted, stolen or seizedDepartment for International Development insists 'zero tolerance' to corruptionBy Jason Groves Political Editor For The Daily Mail Published: 19:31 EST, 3 January 2020 | Updated: 20:14 EST, 3 January 2020 British aid to the world's most corrupt countries has risen by more than a third in five years, figures reveal.Payments to the 20 worst states totalled almost £1.5billion in 2018 – up from £1.1billion in 2014.The £400million increase comes despite warnings that money channelled to corrupt nations risks being wasted, stolen or seized by terrorists.The Department for International Development (Dfid) insists it has 'zero tolerance' to corruption and adopts extensive measures to prevent taxpayers' money falling into the wrong hands. In the worst cases, funds are channelled through aid agencies rather than handed to governments to avoid money being siphoned off by corrupt officials. Payments to the 20 worst states totalled almost £1.5billion in 2018 – up from £1.1billion in 2014. Pictured: Al-Shabab fighters in SomaliaBut the figures will fuel debate about Britain's £14.5billion aid budget – and the controversial target to spend 0.7 per cent of our total income. The UK is one of only a few countries to hit the target and spends far more than most comparable nations. Boris Johnson is considering scrapping the Dfid and handing control of the aid budget to a beefed-up Foreign Office in a Whitehall shake-up.The move is opposed by aid charities, who claim it could dilute help for the world's poor. But Tory MP Peter Bone said the new figures underline the need for sweeping reform. 'People will be appalled that we are sending millions to corrupt regimes,' he said. 'The public don't mind giving aid but they don't want it funnelled off by corrupt officials or used to buy private jets.'This whole problem comes back to having an arbitrary target for spending – it just doesn't make any sense. I hope and expect to see some radical changes in this area.'Successive governments have not listened to the public on this issue, but I think we will see that change now, and that could very well involve scrapping the department, which would be a good thing.' The Conservative manifesto commits to retaining the 0.7 per cent target. But ministers are said to be interested in refocusing aid in line with the UK's diplomatic and economic priorities. The Department for International Development insists it has 'zero tolerance' to corruption and adopts extensive measures to prevent taxpayers' money falling into the wrong handsRespected think-tank Transparency International produces an annual list of corrupt countries. Analysis by the Daily Mail shows that Britain sends aid money to 17 of the worst 20.Beneficiaries include Somalia and Syria, where Western aid has been appropriated by terrorist groups. In 2017, the Government was forced to suspend a £12million aid scheme to Syria amid revelations that the cash was at risk of going to jihadi groups.Aid money sent to Somalia is also at risk of being 'taxed' by terror groups such as Al Shabab. An investigation by CNN in 2017 found the murderous group was extorting thousands of pounds a day through roadblocks and 'taxes' on merchants supplying international aid destined for refugees.An internal Dfid 'risk register' in 2017 concluded there was a 'certain' chance of funds being diverted by extremist groups. But British aid to the war-torn country rose by 57 per cent over the five-year period to £193.8million.Aid to Afghanistan, long seen as one of the world's most corrupt states, rose by 26 per cent to £248.7million. Iraq saw its funding almost double to £73.9million.The overall total was swollen by big increases in aid to Syria and Yemen, where civil wars have led to humanitarian crises. Both countries have also seen reports of aid shipments being stolen.A Dfid spokesman said taxpayers' money was safe. 'UK aid only goes to trusted partners to help those in extreme poverty, not directly to the governments of the most corrupt countries,' the spokesman said. 'Dfid has strict measures in place to protect taxpayers' money including regular audits and fraud assessments.'A department source said that aid projects in fragile states could help make Britain safer by heading off problems such as illegal immigration and terrorism.