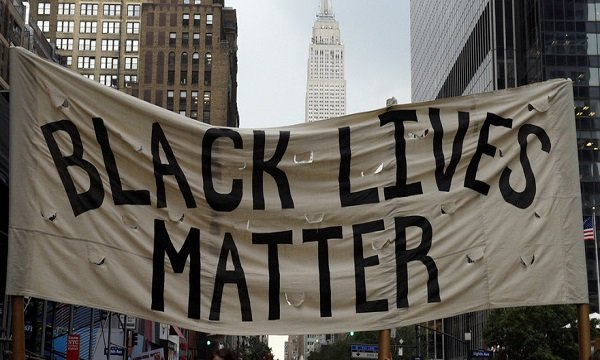 From controversial comments about African Americans by Ethiopian Prime Minister Abiy Ahmed to debates on statue removal and police brutality, the “Black Lives Matter” movement has attracted Ethiopian news agencies and social media attention. Just like in the United States, however, there is no consensus on how to both interpret societal problems and approach a solution.

Since the May 25th death of African American man George Floyd under custody of a white police officer, protests through out the United States have consumed media coverage that was previously dedicated to the CoronaVirus pandemic. People in several cities worldwide have joined in solidarity, however most cities in 3rd world African and Asian countries have been relatively quiet, including in Ethiopia. In Addis Ababa, solidarity protests planned online by activists have mostly fell on deaf ears.

The last mass protest for diaspora causes held in Ethiopia was in 2018 in response to the suffering of Ethiopian/African immigrants inside Arab countries, where they face more overt discrimination and abuse.

Inside Ethiopia itself, where police brutality is normalized, and African American causes are at the bottom of priorities, the mere display of solidarity with US-based “Black Lives Matter” (BLM) is perceived as being out of touch or elitist.

Nonetheless, Ethiopian social media had its share of controversial debates driven by diaspora activists and media, particularly in Minneapolis, Minnesota; the location of George Floyd’s “I CAN’T BREATHE” last words, as a white policeman suffocated him to death. Minnesota was one of the places the Ethiopian Prime Minister visited in 2018, due to its significant Ethiopian population, particularly of ethnic Oromo. ZEHABESHA media, the top Ethiopian media based in Minneapolis, covered local protests. And popular Oromo politician Jawar Mohammed, also from Minnesota, wore a t-shirt displaying “I can’t breathe.”

However, controversy arose when some Ethiopians claimed statues supporting hate in Ethiopia should be removed, just like the Robert E Lee statue being removed in the United States. For example, the Anole Monument built by TPLF in Oromia is widely perceived as an attempt to perpetuate ethnic hatred and division. Historically, similar to the American Union army of the 1860s, Ethiopian union forces from Shewa and led by Oromo general Ras Gobana defeated a southern army in Arsi. Yet, the Anole monument depicts this 1880s battle as a one-sided massacre, despite Oromo historians’ claim that the southern Arsi army was initially victorious in previous battles against Shewa. But many Ethiopians believe the Shewan Union army’s triumphs led to East African unity and a victory against European colonization, and ultimately ended the main slave trade route from southern states like Jimma. A popular Social media Ethiopian activist nicknamed “Tesfaye Woldeyes,” added on Twitter that General “Robert Lee’s equivalent in the the Ethiopian experience is Leenjiso Daga,” an Arsi General who lost to Oromo general Ras Gobana.

Even more controversy occurred when diaspora Oromo activists attempted to associate problems back home in Oromia with Black Lives Matter by using hashtag “Oromo Lives Matter.” The problem was many Oromo politicians in Diaspora are known to advocate for nativism and ethnic segregation back home; which are ideals opposite to historic African American causes and Black Lives Matter.

“Its flabbergasting to see people screaming Black Lives Matter from the bottom of their lungs meanwhile they are pro ethnic supremacy and ethnic cleansing in Ethiopia,” said a US-based activist Daniel on social media. Several Amhara activists in diaspora have also complained about abducted Amhara students, but they also used social media to incite ethnic clashes in northern Ethiopia, where ethnic Gumuz and Qemant were massacred by Amhara nationalists in recent years. Obang Metho, a popular human rights defender, said its important that all people advocate for all “Ethiopian lives matter” instead, since Ethiopia is a country of 80 minorities. Another critic from Addis Ababa described the hypocrisy: “telling everyone that Black lives matter but we Ethiopians can’t attend our university classes in another region.”

His frustration was shared by many Ethiopian university students who have been increasingly targeted based on their ethnicity as non-state actors and mobs committed massacres nationwide. At times, Ethiopian police gave a blind eye to these mass killings, to avoid accusations of police brutality. In other cases, local police encouraged or joined ethnic mobs during killings, due to the weakness of central government during the transition period since 2018.

When Abiy’s government eventually began more active law enforcement in 2020, it has now been accused of brutalities itself. Therefore, government broadcast media has recently provided extensive coverage of Black Lives Matter protests and police brutality in America, which critics view as the Abiy administration’s attempt to distract citizens from problems at home, especially in Oromia. In less than two years, Western Oromia officials have blamed a local OLA militia for at least 778 murders, while defenders of the OLA rebels accuse the government of killing over 200 alleged supporters of the rebellion.

Another critic of the Ethiopian government, blogger Befekadu Hailu, accused the Prime Minister of demeaning African Americans. Doing so, Befekadu misquoted an old and unrelated statement by Abiy out of context. In an audio from 2018, the Prime Minister was giving a speech advising Ethiopians to move forward together toward prosperity, instead of fighting endlessly over past ethnic grievances. Abiy, who is from the Oromo ethnic group himself, has appealed for less ethnic division in Ethiopia. Abiy used an example of economic advancement by Jews, who have endured the Holocaust and discrimination worldwide, including in America; in contrast to the unending plight of African Americans. Befekadu, incorrectly, accused PM Abiy of labeling African Americans as “lazy,” while in reality, Abiy appeared to compare leadership mentality between Jewish and African American elites. The Prime Minister also did not deny systematic racism or historic injustice facing African Americans, in fact Abiy has previously spoken with US officials like Washington DC Mayor Muriel Bowser about Ethiopian government and African Union (AU) solidarity with African-American causes.

It is unlikely that fake news and political posturing will be any less vicious as Ethiopia approaches a historic election season. Every side will attempt to play victim, defame the other or exploit global trends, including Black Lives Matter.  Like Martin Luther King Jr won the Nobel Prize in 1964, Ethiopia’s Abiy received the prestigious award and hopes to bring peaceful change as well. However, just like militant groups in Ethiopian politics, several African American leaders accused Martin Luther King (MLK) Jr of being soft, delaying full Liberation, sabotaging real change and economic justice. The Yeroo Magazine, an Oromo private newspaper in Oromia, shared such criticism of MLK by the famous Malcolm X on its Twitter page, which mirrors the criticism of Oromo hardliners against Prime Minister Abiy Ahmed.