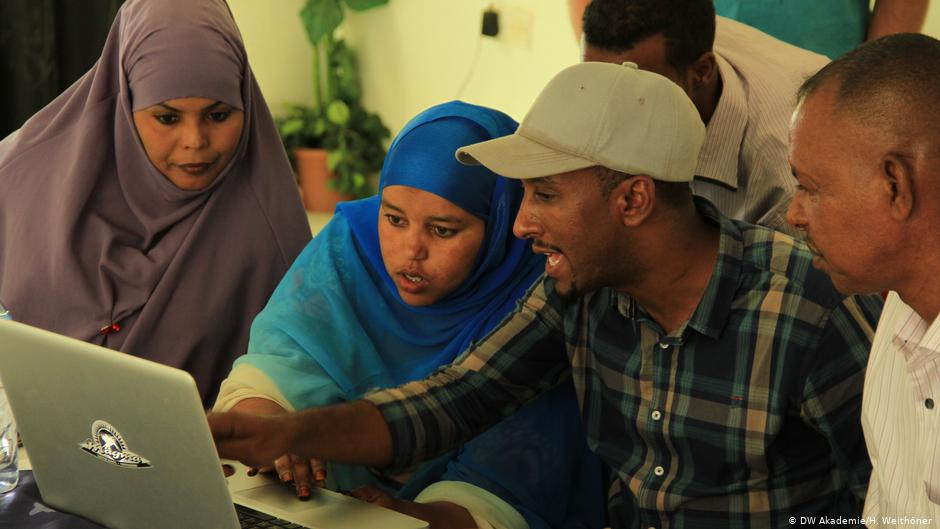 Attacks on Somali journalists are rising, according to Amnesty International. Media workers are being hounded by parties on all sides of the conflict, making it one of Africa's most dangerous places for reporters.

In recent years, journalists have primarily faced threats from the Islamic militant group al-Shabab. Now, they are also being targeted by their government.

A new Amnesty International report, entitled "We live in perpetual fear", has documented the dramatic deterioration in the situation for media workers since President Mohamed Abdullahi Mohamed, also known as Farmajo, took office in February 2017.

At the time, Farmajo's inauguration generated optimism that Somalia — which has been rocked by decades of conflict between clan-based militias, the al-Shabab Islamist group and government forces — would move toward peace and improve human rights, including media freedom.

Instead, the Amnesty International report has found that Somalia's journalists face increasing threats of targeted attacks, arbitrary arrests, harassment and intimidation from all sides — including government officials, state authorities and al-Shabab.

Attacks on reporters, like this car bombing which caused the death of Yusuf Kenynan in 2014, are a constant in Somalia Journalists 'under siege' "Somali journalists are under siege.

From barely surviving explosive-wired cars, being shot, beaten up and arbitrarily arrested, journalists are working in horrifying conditions," said Deprose Muchena, Amnesty International's director for East and Southern Africa in a press release.

Since 2017, at least eight journalists have been killed in south-central Somalia and Puntland, in northeastern Somalia.

Eight others have been forced to flee the country since October 2018.  The Amnesty report is based on interviews with more than 70 people, mainly journalists and human rights defenders, as well as analysis of other research on the situation in Somalia.

It highlights the intimidation of independent journalists in particular and notes the lack of investigations into such violations and abuses.

"Authorities should also thoroughly, impartially and effectively investigate the alleged violations and abuses including physical attacks, killings and attempted killings, arbitrary arrests and intimidation of journalists and allegations of online harassment and social media manipulation," the report recommends.

Somalia has topped the Committee to Protect Journalists' Global Impunity Index, which ranks states with the worst records of prosecuting the killers of journalists, since 2015.

That compares to 16 journalists detained in 2017, 12 in 2016, and six in 2016.  Corruption and censorship As well as direct threats, the Amnesty International report documents censorship and allegations of bribery of media outlets by the Somali government.

"Government officials have allegedly been bribing most of the main media outlets, their directors and editors and some Somali social media influencers who live in country and abroad, for positive coverage," the report says.

Media workers interviewed for the Amnesty report said they weren't able to report freely on sensitive topics because of the bribing of their bosses.

Journalists find it particularly difficult to cover al-Shabab attacks and security-related issues, corruption and human rights, as well as "stories about government policy failure, particularly those touching on the offices of the president and the prime minister," according to the report. Journalists face increasing threats from state security officials, said the Amnesty report DW tried to reach the Somali president's spokesperson for a comment on these allegations, but the spokesperson's phone was switched off.

Draconian new media bill The Amnesty International report comes as Somali journalists face another new threat: a media bill that could open the way for the criminal prosecution of reporters and curtail media independence.  Among other things, the bill makes it possible for the government to prosecute journalists for "spreading unfounded propaganda," without defining what this is. It also fails to protect the confidentiality of sources.

The bill also requires all publishers and journalists to be licensed by the Ministry of Information, and allows the government to nominate members of a still-to-be-created "independent" Somali Press Committee.  Somalia's parliament has approved the bill, but it still needs to be signed by President Mohamed Abdullahi Mohamed before passing into law.

The biggest enemy of press freedom in Somalia is "rampant culture of impunity," he added.  'A matter of life and death' Despite the killings and daily death threats, Somali journalists continue to file reports, determined to show the world a firsthand view of the violence plaguing their country.

"Working as a journalist in Somalia is a matter of life and death," freelance journalist Mohamed Abukar Ahmed, who is based in Mogadishu, told DW.  "But I want to tell the truth about my people and it [requires a] sacrifice from our journalists."