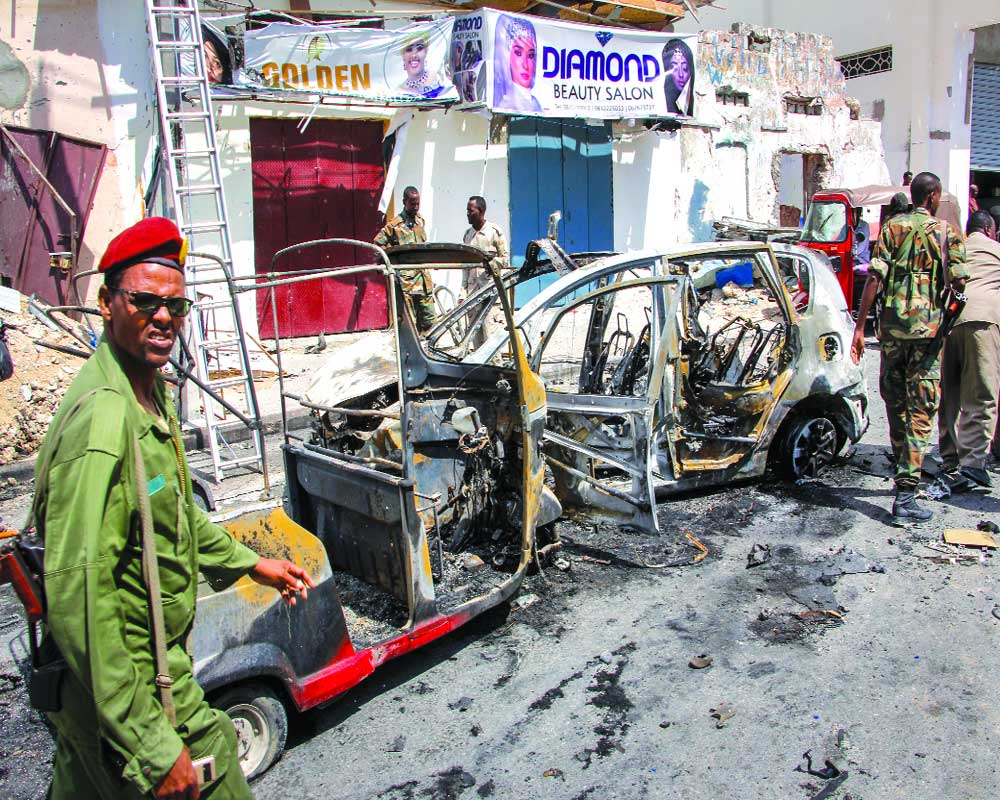 Somalia, a country in the eastern most part of the African continent in the Horn of Africa, is facing the rage of the Islamic jehad spearheaded by Al-Shabab. It lies along the Gulf of Aden and the Indian Ocean which makes it more vulnerable to external attacks even from the sea front.

The group has about 5,000-9,000 trained cadre, apart from sympathisers and radical supporters all across Somalia. Its main target is to topple the internationally recognised Government of Mohamed Abdullahi Mohamed, in power since 2012, and establish a Sharia-based state. The Al-Shabab has been successful in transforming itself primarily from a terrorist unit to an insurgent group and finally raising itself to the status of a proto-state actor.

However, depending on circumstances, it can take any of these forms. That is how it has grown and become a potential threat to the survival of the fragile Government of Somalia.

The dastardly car bomb attack by the Al-Shabaab last Saturday once again raised the ghost of Islamic terror in the Somalian capital of Mogadishu. It killed more than 79 people, and injured at least 125 people. Claiming responsibility for the attack, one of the group’s spokesperson Sheik Ali Mohamud said, “….the Mujahideen carried out an attack…targeting a convoy of Turkish mercenaries and apostate militia who were escorting them.” This attack was the biggest to hit Somalia since a truck exploded in 2017 near a fuel tanker in Mogadishu, creating a fireball which killed nearly 500 people.

Al-Shabab in the Arabic language refers to ‘The Youth’. The group is allied to Al-Qaeda. In a paper titled, “Breaking the Bonds between Al-Qaeda and its affiliate organisations”, Daniel L Byman wrote in 2012, “In February, 2012, the Somali-based Shabab formally declared its loyalty to Al-Qaeda, a move that capped the transformation of Al-Qaeda’s relationship with Somali militants into a more substantial partnership. In the early 1990s, Al-Qaeda tried to work in the collapsed Somali state, but often found the violent civil war there overwhelming, so much so that its operatives were unable to make significant inroads. It did, however, kept Somalia as a part of a regional base for its attacks against the US and UN peacekeepers and strikes in Kenya against the US and Israeli targets.”

This indicates how Al-Shabab has grown from Al-Qaeda and gradually expanded its wings, becoming a multi-state actor. At its zenith, Al-Shabab controls nearly 81,000 square miles or about one third of Somalia. However, the Islamic State (ISIS) at its peak, used to occupy only over 30,000 square miles, covering areas in three countries of Iraq, Libya and Syria.

The Al-Shabab emerged as the radical youth wing of Somalia’s now defunct Islamic Courts Union (ICU) in early 2007. But its quick success and aggression provoked the Ethiopian forces to invade Somalia and scatter the group. But the ferocious campaign launched by the insurgents finally drove the Ethiopians away from Somalia. The ICU which operated in Mogadishu from 2000-2006 was a legal and political organisation founded by Muslim clerics from Abgal sub-clan of the influential Hawiye clan. These courts adjudicated personal status and criminal law as per Sharia.

Besides, as they were backed by clan-based militias, they were truly effective in maintaining strong law and order in and around Mogadishu.

It must be noted here that ISIS is not the first Islamic radical group to establish a proto-state in modern times. But Al-Shabab controlled and administered vast territories across Somalia. And it mobilised resources and people around their territorial limits and beyond, long before the ISIS did in 2014 and beyond.

In fact, the Al-Shabab developed a sophisticated and comprehensive taxation system that brought them millions of dollars each year. It collects taxes in the guise of zakat and an excessive tax, in the name of fighting a holy war, the way the ISIS did.

Both the ISIS and the Al-Shabab have the same goal: To create a religious state according to their radical interpretation of Sunni Islam. Also they employ similar tactics and draw their allegiance to Wahabi sect of Islam. The Wahabi movement was founded by Muhammad Ibn Abd al-Wahab in the 18th century in Najd, Central Arabia. It was adopted by the Saud family in 1744. Today it is widely prevalent in Saudi Arabia and Qatar. As it officially goes, the members of the Wahabi movement regard themselves as ‘al Muwahhidun’ i.e. Unitarians. And it is derived from their emphasis on the ‘absolute oneness of God’ (Tawhid). Therefore, its radical followers and advocates like the ISIS and the Al-Shabab reject all acts they see leading to polytheism. Thus they strongly stress on returning to the original teachings of Islam as mentioned in Quran and Hadith i.e. traditions of Muhammad. Further Wahabi followers condemn all innovations i.e. bidah in Islam in any form.

Though both ISIS and the Al-Shabab draw their inspiration from radical interpretation of Islam, they differ on many fronts. ISIS operated, till its recent fall, in much larger geographical areas than that of the Al-Shabab. The former engaged in extreme atrocities such as mass beheadings, crucifixions and burning victims alive, both for its worldwide propaganda and to spread a regime of Islamic terror. But the Al-Shabab, being an Al-Qaeda sponsor, rejects such brutal tactics as purely unproductive. But recent attacks carried out by the group exposes its double standard both within and outside Somalia.

Though it has been pushed out of the major towns of Somalia by the African Union (AU) troops, including Mogadishu and the vital port of Kismayo in 2011-12, it has remained a potential force in some of the rural areas. It is capable of conducting raids and attacks in nearby countries, such as Kenya.

In fact, it has carried out more than 20 terror attacks in Kenya, including the capital city of Nairobi in the last five years. And it has taken the lives of about 300 people in Kenya so far. Many say that African Union Missions in Somalia (AMISOM) and in Kenya at best have stagnated so far. On the other hand, the operational capacities, intimidation techniques and ground fighting prowess of Al-Shabab have been growing. The worst part is that the Federal Government of Somalia is plagued by corruption and infighting. It is seriously creeping as the service-delivery by both Mogadishu and the newly formed states are lacking in true sense of the term.

Clearly, despite its internal and external contradictions, the influence and aggressive mood of the Al-Shabab is on the upswing again. It has been successful in spreading a regime of fear among the commoners. And more importantly, the insurgents have absolutely clogged the basic functions of the civil administration across Somalia. This has, in reality, turned the tide towards the radicals, both in terms of displaying its weight and equally paralysing the mobilisation of the civil society, particularly at the grassroots level. But what has been predicted is that the potential long-lasting damage posed by its continuous killing of Somali civilians may further erode its support base.

(The writer is an expert on international affairs)